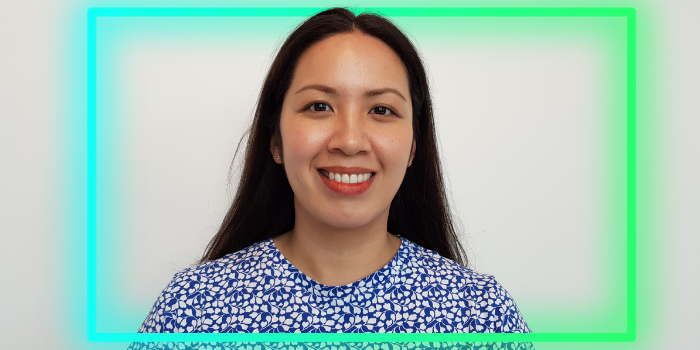 Katrina Hau grew up in rural England as a second-generation immigrant. She is open, honest, humble and kind. Her childhood was dominated by a strong feeling of being ‘other’, but she appreciates her formative years for the resilience they forced her to build, and her present-day passion for diversity, equity and inclusion.

Her career has been admittedly “zigzagged”, and spans two continents, but it’s always been intertwined with people operations, and with tech too.

When COVID-19 took the world by surprise, she relocated from the UK to New Zealand, where she went through a massive learning period.

Some career lessons, the Women Fellowship and unmatched degrees of humility and perseverance later, she has her dream job as Talent and People Experience Partner at Auror. Here’s how she got there. ‍

Part one: A childhood that shapes you

“My mum and dad were first-generation immigrants. Dad was born in Hong Kong, Mum was born in Shenzhen, and they made their way to the UK where they had me,” Katrina tells me.

“I didn't have the smoothest childhood. I was born in London, which is a super multicultural city, but I was actually raised in a very small village in the south of the UK.

“Growing up, I had an acute sense of being 'other'. Sometimes it felt like we were the only non-white family in the village.

“I really struggled. I am quite introverted, so I hated not blending in, I hated sticking out and being different. On top of that, perhaps unsurprisingly, I also got bullied a lot, because we were different.

“My parents owned a fish-and-chips shop when I was younger, and I witnessed them at the end of some really awful racist incidents as well. Drunk people, ignorant people, rude people, all sorts. And they just kept their heads down, didn't say anything, didn't want to make a scene. They just pressed on.

“I definitely took on that approach as a child. I would think, ‘just don't say anything and don't make a scene’. That shaped who I was growing up. There was a high degree of insecurity and a lack of confidence in my ability to express myself.

“It wasn’t until I got older that I really became sure of myself, who I was, and what I could offer. It took a little while to get there.

“That’s not the first time that I've told that story. I’ve been open about it, not to gain sympathy, but to enable people to understand why I'm such a strong advocate for diversity, equity, inclusion and belonging.

“And because going through that childhood made me super, super resilient.

“I went to uni in a city called Birmingham; I deliberately chose a pretty multicultural place to study,” Katrina reflects.

“My parents wanted me to either become a doctor, a lawyer, or a dentist or an accountant. I didn't want to be any of those things. But I wasn't at the point yet where I was confident enough to stand up to them and say ‘I want to do something in the social sciences’.

“Social sciences in traditional Chinese society is always perceived as being a bit ‘less’ than more corporate professional careers.

“So I did public policy along with sociology because that was my way of appeasing them. I said, ‘the public policy side will set me up for a career in government’.

“Although it was the sociology part that I was most interested in, I ended up really enjoying the public policy side. It gave me a look into how decisions are made at the systemic level. Until then, I didn't have a grasp on how policy made at the governmental level can have a very, very wide ranging and powerful impact on certain people in society.”

“If I were to look back at my career, I would describe it as a zigzag. I zigzagged my way through different jobs and sectors. At the time, it didn't really feel that meaningful, but now that I look back on it, everything has a purpose and a place, and I felt pretty good about where I landed,” Katrina says.

“My first job was a placement year at Fujitsu. That was where my love of tech came from.

“When I graduated, I wanted to go into the social sector, but this was in 2009, when the UK was still in the throes of a recession. The jobs weren’t there. So I started applying for more generic grad schemes at bigger companies.

“I ended up at a big tech consulting firm in an account management role, and eventually crossed over to the research side as an analyst. What I really loved in that role was finding out about people's challenges in the tech world, and as I got more senior, having the responsibility of training and coaching people and setting them up for success.

“That was when I realised how much I enjoy people development.

“I realised I wanted a job where I could bring together my love of tech with my love of people development. That led me down the startup route. I took a job at a small charity that helps young people launch startups.”

“When I felt it was time to move on, I decided to focus more specifically on people-development, and joined a social enterprise and talent incubator called Koreo. I joined as a Programme Manager and made my way up.

“I left to have my daughter Violette. She’s just turned two.

“And then COVID happened and took us all by surprise. My husband is a Kiwi, and it was always our plan to move back to New Zealand, so we decided to move in the middle of COVID-19.”

“Before I started looking for a new job, I very deliberately gave myself six months to absorb and learn about New Zealand, the culture, the challenges and the people,” Katrina says.

“As luck would have it, I heard about the Startmate Fellowship, and was encouraged to apply.

“I went to a lunch that one of the Fellows organised, and ended up sitting next to Kirsti Grant, who is Director of People Experience at Auror. We were just chatting about our backgrounds, and she turned to me and said: ‘Do you know I'm hiring?’ And the rest is history.

“Auror is a retail crime intelligence platform. When I say that, you might think about kids stealing candy, or other one-off shoplifting incidents. But what we're really interested in is the wider impact of retail crime. We focus on the people who are highly organised in their approach, who are going into stores and “stealing to order”, then using their profits for darker purposes and ultimately creating a negative impact on society.

“An example would be the people stealing baby formula from stores, mixing it up with gross stuff and selling it on. We want to stop that kind of thing from happening. We want to make sure the community stays safe and societies are protected from that kind of crime.

“So for me, it was a no-brainer. Part of the reason I was hired is because I have a strong passion for making sure we lead with DE&I in mind. I love the dedication the leaders have to trying to build out a more inclusive workplace at Auror.

“It's going great. Every day brings its own challenges. Every day is different. The people are incredible. I just love the mission and I love the dedication to the wider social impact.”