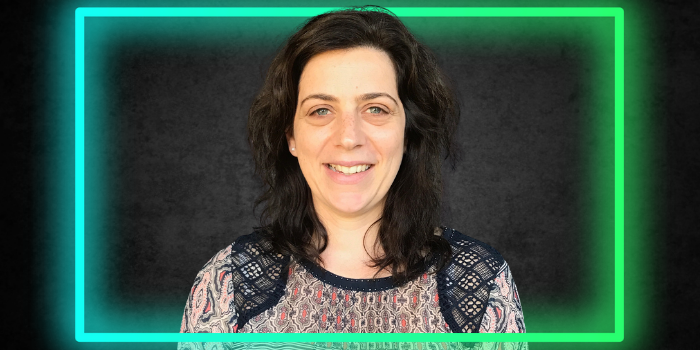 Bec Rozencwajg is frank, warm and reflective — and has had a career that surprises, delights and impresses. It's filled with international travel, cultural immersion, government relations and a relentless pursuit of meaning.

When re-entering the workforce after maternity leave, she found herself seeking a role with a tangible, positive impact. Some time at B Lab Australia and New Zealand, the Women Fellowship and an internship at Flying Fox Ventures later, she landed her dream job as Investment Manager of LaunchVic's Alice Anderson Fund. Here's how she got there.

Part one: Learning by doing

"My grandfather learnt the skill of a blacksmith in Germany, and it was what kept him alive through World War II and in concentration camps. He managed to escape, and when he and my grandmother came to Australia post-war, he used that skill to set up a business of his own.

"My mum went into that business, and my dad had his own business, so I grew up with entrepreneurship all around me.

"I studied business with a major in Japanese because that's where the future of business looked like it was heading at the time. I really wanted to improve my Japanese skills, so I decided to go and live in a small country town where I would be forced to speak Japanese. I ended up staying there for a while, working in a family's soba shop, immersed in Japanese culture, forced to really learn by doing.

"When I came back to Australia, I decided to finish off my commerce/arts degree and complete a postgrad in Asian studies. I've always loved learning about traditions and culture."

Part two: Searching for a place to land

"My degrees led me to a job with the Japanese Consulate as a political and economic researcher. I basically read lots of newspapers and would write reports for the consul general on Australian politics and economics," Bec tells me.

"It was super interesting, but I wanted more commercial experience and was successful in applying to the Qantas grad program, which ended up being a great opportunity to explore different roles. (And, oh the perks!)

“I did a rotation with the government and international relations team, and I loved it. I was working on bilateral air deals, and I'd write briefs for the CEO ahead of different meetings he was having with different executives around the world.

“I was actually with Qantas when Jetstar was starting up, and so I got to have my first taste of startup culture.

"I then jumped at an opportunity to work with Tourism Victoria as their airline development manager. That was an awesome job. I flew around the world encouraging airlines to fly into Melbourne and also saw the interplay of commerce and government from the other side.”

"Before I started a family, I decided to take some time off and learn about something I was quietly building a passion for: cheese," Bec tells me.

“I was fascinated by the alchemy of four raw ingredients becoming all the different cheeses in the world.

"I won a scholarship to study cheese-making and then got placements with different cheese-makers around the country. I took myself off to the US and France to spend time with some of the leading artisan producers.

“Spending time with these top producers who cared so deeply about their farms, animals, supply chains, and customers made me really appreciate the importance of a values-driven approach and made me wonder whether the same could be applied to business, investments and life in general.

"When I came back to work after maternity leave, I knew I wanted to work within a purpose-driven business that really cared about the social and environmental impact it was making. That pursuit led me to a role with B Lab Australia and New Zealand (the not-for-profit behind the B Corp Certification) as their Head of Policy and Government Relations. I loved working alongside for-profit businesses that were collectively using business as a force for good.

“Working in a co-working space with Impact Investment Group and Giant Leap Fund also exposed me to the world of finance and how investing with an impact lens could help support solutions that create a better future.

“Despite avoiding every finance subject during my commerce degree, I became really interested in unpacking the world of investment further by understanding where my superannuation and managed funds were invested. I also started investing in and advising impact focussed companies in their infancy.”

Part four: The Women Fellowship and the Alice Anderson Fund

"I came across the Women's Fellowship in the midst of working from home and home-schooling my kids during the pandemic," Bec says.

"I absolutely loved doing the Fellowship because it was an amazing opportunity to network in a year that didn't involve a lot of socialising. It was also a valuable period of introspection.

"I had been on a personal journey learning more about investment, however, I had shied away from a career in the investing space because I didn't have a typical finance background. The Fellowship allowed me to recognise the synergies between investor relations and the stakeholder relations work I had done in the past, and I began to explore roles in VC.

"I took an opportunity to intern with Kylie Frazer and Rachael Neumann, putting together an investor relations piece for Flying Fox Ventures. It was a fabulous opportunity to work with two of the best and opened up my eyes to how important it is to have a diversity of thought in all parts of the startup ecosystem.

"When the opportunity at LaunchVic came up, I was excited about the impact I could contribute to by helping more women access capital to fuel their business growth. Going through the Fellowship definitely helped me reflect on my past experiences and pitch myself and what I could bring to the role.

"I am now the Alice Anderson Fund Investment Manager at LaunchVic.

“I have loved learning more about the Fund's namesake, Alice Anderson, since joining the team at LaunchVic. Alice was relentlessly enterprising, building a thriving business in the 1920s in a newly emerging and very male-dominated industry. Alice was part of a generation who conceived of women's advancement through economic and professional equality.

"Today, we know the number of female founders getting funded is tiny in comparison to the total amount of funding in the ecosystem. Ultimately, having more female decision-makers on investment committees is also a step in the right direction.”