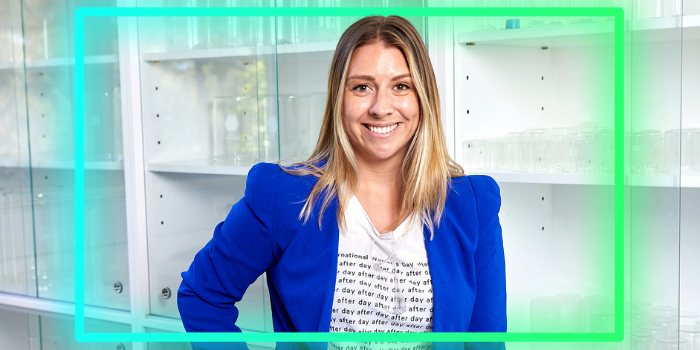 Katie Sizeland was born in New Zealand, is as curious as they come, and upon reflection, sees her impressive career in science as fairly inevitable. She is also animated, warm, self-aware and buzzing with excitement.

After completing her undergrad and PhD in New Zealand, she moved to Australia for an opportunity she created, but has her sights set on moving back to NZ in the near future.

Four years, several new challenges and the Women Fellowship later, she has built a launchpad, catapulted herself into the startup ecosystem and started building out an impressive network. Here’s how she got there.

Part one: Curious and curiouser

“I was always curious. I was always asking questions. My very first word was ‘why?’ So maybe both my career in STEM and the Startmate Fellowship were meant to be,” Katie tells me.

“My background is in science and tech. I did my undergraduate in chemical engineering and nanotechnology, and then I did my PhD in materials engineering.

“Engineering was sold to me as creative science. At school, I pretty much did half-half between creative subjects and science subjects, so it sounded just perfect.

“All of that study, right up to the end of PhD, was based in New Zealand.

“But I’ve never been about going to a university and becoming an academic scientist.

“Right from PhD days, it’s always been about solving real problems and working with industry. I raised funding for my own postdoc, which focused on bringing together a whole bunch of different organisations and industry partners to access science they otherwise couldn’t.

“So solving those real-world industry problems and having a tangible impact has been at the centre of everything I have done.”

Part two: Across the ditch

“I made the move to Australia to work on a world-class beamline at the Australian Synchrotron,” Katie explains.

“I currently work for a government science organisation called ANSTO. My role is in science management and strategic projects. Essentially, making all the bigger picture projects happen that enables the researchers and the scientists to do what they are good at.

“So it’s definitely more on the strategy and operations side of science.

“I view my current role as a stepping stone, which was a really good intro into the Startmate Fellowship, because I was starting to think about what’s next.”

“I am a Kiwi and I really, really want to get back to New Zealand. My primary reason for doing the Fellowship was to start building and strengthening networks in New Zealand,” Katie tells me.

“The Fellowship was incredible. I have heard it described as a launchpad into the startup community. But I think, for me, it was more. It built the foundation for the launchpad as well. It gave me the confidence and the skills to get out there, and taught me how to best approach a startup or a VC or someone you want to connect with.

“It was also about really exploring the startup community as my potential next step. I’m in a strategy operations role in science at the moment. I am currently part of a really big organisation. There are 1,600 people here. And because I’m in a strategy role, I no longer feel like I am directly having an impact.

“That’s what I love about science. I loved it when I was on the ground doing the work that had a real and tangible impact.

“So why Startmate and why startups? Because, hopefully, I’ll jump into a startup or an organisation focused on the startup ecosystem, that has a team of people who are really passionate about what they’re doing. I want to work with innovative people on something that is having a positive and tangible impact on people and our planet.”

“What’s next for me? Honestly I don’t know. But whatever it is, bring it on,” Katie says.

“I started the Fellowship with a fairly narrow goal in mind. I wanted to get into strategy and operations in a deep-tech startup. Throughout the Fellowship, my goal has shifted. I’m now also super interested in the operations ecosystem behind the startups, so accelerators and incubators and organisations enabling the innovators and entrepreneurs.

“Why focus on one startup when you can help a whole bunch of them? I think that’s really cool.

“I’ve also broadened my scope a bit from being solely deep tech-focused too. So long as the startup’s values and mission align with mine, and they’re having a positive impact, I think I can jump in and just get stuck in.

“So, what’s next is hopefully a strategy and ops role in the startup ecosystem in New Zealand. NZ is primed and everything is ready to kick off. It’s all very exciting.”

By
Bronte McHenry
After seven years climbing the management consulting ladder very quickly, Kiara Olrich knew it was time for a change.

By
Bronte McHenry
Kyle Forster is a PhD-qualified engineer specialising in aerodynamic design and a small business owner... and up until a year ago, was an Aerodynamicist on Mercedes' Formula 1 team.