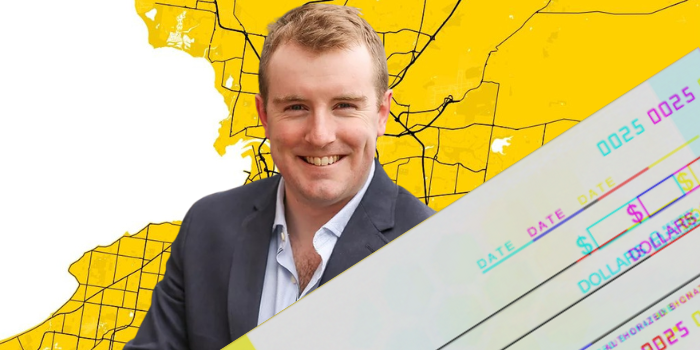 He said he’d just written his first angel cheque, and invited anyone interested in the process to reach out.

Fewer than 24 hours later, the two of us were on a Zoom call — me, with 14 questions at the ready, and him, with investing experience many of us dream about but put in the never-going-to-happen basket.

But Tom, in his own words, isn’t “a conventional angel”. He is risking more of his personal net worth than Jason Calacanis and others like him would recommend. Conventional wisdom is that you aim to “deploy 5–10% of your total net worth, split between 25 companies”.

“As wise as that advice is, it would be very limiting for me,” Tom says. “No one would bother with me putting 1k or 2k into their businesses.”

In fact, the main reason he took part in Startmate’s First Believers program was to find out “how do you do this if you don’t have millions of dollars of liquid capital?”

“My goal is to reinvest a lot of the income that is beyond my daily expenses — mortgage, and kids, pre-school and stuff — over the next decade, making 2–3 investments per year,” he says.

Clearly, First Believers helped Tom find the answers he was looking for, because he contributed $20,000 to Mr Yum’s recent $11 million post-seed round.

So, here’s how he got his wings.

Tom was born in the UK, lived in Japan after university, and then in the US for seven years when he was working at Acquia.

In addition to boasting an impressive passport and, one would hope, an appreciation for okonomiyaki, experiencing so many ecosystems first-hand has given him a broad-spectrum view of angel investing in the developed world.

Speaking about the US ecosystem, Tom notes “they’re very much at the point now where there’s a very well established ecosystem, and it’s intensely, incredibly competitive”.

“The kind of lengths that VCs and angels are willing to go to prove value-add, to build, you know, a 5% advantage in connections or opportunities, is pretty extreme,” Tom says.

“In the US, so much of the focus is getting ahead on what’s next and coming. Whereas in Australia, it’s a very small set of quite well established VCs who, in many cases, participate in the same rounds.

“For now, there is this recognition that more people getting involved is good for the ecosystem.”

And it’s for this reason Tom says Australia and New Zealand are the perfect places for aspiring angel investors to take the leap.

“In Australia, I feel like it’s pretty easy for me, relatively speaking, to strike up a pretty good relationship with the founder of a company and immediately get involved if they’re keen for me to.”

To state the obvious, moving from the US to Australia or New Zealand isn’t a golden ticket to angel investing.

“Without being overly dramatic about it,” Tom jokes, “I’ve spent a lot of my life preparing for this moment and making my first angel investment.”

“Before deploying any cash or getting involved in First Believers, I had just been really passionately helping a bunch of companies, with people I really liked.”

How did this come about? Tom was on LinkedIn when he spotted a post from Stew Glynn, a VC at TEN13, calling for people with experience going to market to help his portfolio companies grow.

He put his hand up, and ended up meeting with founders from the likes of Clipchamp, Outfit.io and Go1.

“There was no expectation of payment; I just wanted to help if I could.”

From there, Tom harnessed the power of the internet and social media, and started following select startups from the wings, keeping track of their announcements, investments, growth and hires.

Tom was on a holiday in Perth when he decided he had the knowledge, networks and cash needed to write his first cheque.

“I knew I had some capital. I was in a position to be able to put it towards an investment. First Believers has given me the confidence and the knowledge to do this,” he reflects.

“Mr Yum was top-of-mind because I’d been following them for some time, and was blown away by the quality of their product and team.

So what did Tom do? He reached out to Stew Glynn, asking if he had a relationship with Mr Yum, and “maybe two or three emails back and forth” later, he learnt they were at the sharp end of closing a round led by TEN13.

Steve introduced Tom to Founder Kim Teo, and she got back to him the next morning.

“It was probably a 24-hour process. It was very, very fast,” Tom says.

“We’re on the phone and spent half an hour chatting. She said: ‘I’m gonna forward you onto one of the firms on our cap table so you can make the investment through them.’

“And it felt very comfortable. That’s partly because I had developed that level of familiarity, and my radar was always up about which companies I wanted to invest in.”

The takeaway here is “have high conviction, act quickly, and know what you’re looking for”.

“Then, by the time it comes to actually discussing with the founder or team, and making an investment, it should be a very simple process,” Tom says.

“There are still lots of institutional barriers to people getting involved,” Tom admits, but because the Australian and New Zealand ecosystems are so young, and relatively progressive, “if you are super resourceful, and you are able to find ways to get connected to people, then it’s easier than you might think to get involved”.

“That was the path, and one of the best things I’ve ever done. I’m really, really glad that I took that leap,” Tom says.

“For me, it’s a long-term investment, not just financially, but in the opportunity to learn from totally inspirational founders.

“These are some very special people who you’re dealing with.”

By
Bronte McHenry
Learning to invest in startups is just like training as an elite athlete, says Christie Jenkins.

Why Customer Success roles are complex, vital and “wildly fulfilling”

By
Bronte McHenry
Today, customer success plays a critical role in every startup’s growth trajectory and ultimate performance, while jobs seem to be popping up left, right and centre.