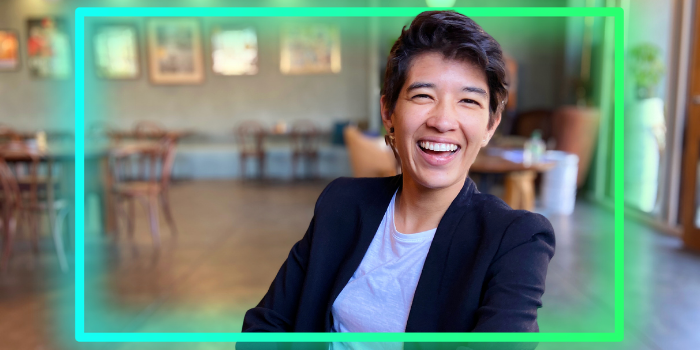 Carola Velazquez Silva was born in Mexico, loves figuring out how things work, and has had her dream job in sight since she was four. She also radiates energy, gratitude and optimism.

She relocated from Mexico to Australia in 2014 in search of adventure and new opportunities, and faced a multitude of challenges entering the startup world.

Six years, a bunch of adventures and the Women Fellowship later, she has her dream job. Here’s how she got there.

Part one: When you know, you know

“As soon as I learnt how to talk, I was asking my mum: ‘What should I do if I want to create my own toys?’ And my mom said: ‘You need to study industrial design.’ So pretty much, since I was four, I knew what I wanted to study,” Carola tells me.

“And I tried the marketing side of design, helping businesses with their brands. I enjoyed it, but it wasn’t really what I wanted to do. My goal is to do things that help the world and make it a better place.

“Then I started my own design studio. It was pretty little, but I had the opportunity to work with different clients and be my own boss.

“After a while, I got very tired and bored of doing that. I wanted to start a new adventure. I wanted to travel. Australia was one of the only countries that allowed you to study and work at the same time. So I said, let’s go.”

“I arrived in Australia and I thought I was going to be able to get a job in design,” Carola says.

“But it was challenging because, on a student visa, you could only work 20 hours a week. When applying for jobs, that was the biggest barrier I faced. People said: ‘We love your portfolio, but we can’t have you on board if it’s not a full-time role.’

“So I decided to try something new.

“I found this incredible, funky Mexican restaurant called Fonda. When I started, we had three restaurants, and now they have eight. I like to think I was part of the little SWAT team that pushed the growth of the company.

“In the end, I worked there for five-and-a-half years. I was studying and working at the same time, so it was a long journey.

“I went from zero, to management roles, which was amazing. I was in charge of so many people and I’ve made incredible connections. I also built incredible skills, like multitasking and extinguishing fires here and there, which is pretty much what you need in a startup.”

“In 2019, a friend sent me a link. She said: ‘You want to be an entrepreneur, you want to join a startup at some point, here is this incredible program my mum sent me.’ So I went on the Startmate website and it just blew my mind,” Carola says.

“I had the opportunity to get into Office Hours and just ask questions. And I haven’t missed an update from Startmate since.

“I officially heard about the Fellowship from Sophia because I applied for a job at Startmate. She said: ‘This role isn’t for you, because you’re focused on creativity and design, but I can offer a spot in the Fellowship.’ I couldn’t believe my luck.

“The Fellowship gives you a community and the opportunity of meeting incredible people.

“But the Fellowship also helped me to understand that a job doesn’t define you.

“It’s a boost of inspiration. The fuel you need to get things done. Since the Fellowship interview night, I’ve been on a high, and it’s just not ending.”

Part four: A dream role at a dream company

“At the start of the year, I was studying augmented reality and virtual reality. I did a little bit of research into which companies are in Melbourne, and the one that attracted me the most was Jigspace,” Carola explains.

“Download the app. It’s so cool. For someone that loves to pull apart things and just wants to see how everything works, the app is what I wish I had when I was four.”

“So I applied with them, but I didn’t hear back.

“Then I got into the Fellowship, and Sophia posted and said: ‘Jigspace is looking for a Designer for X, Y, Z roles, if you want an intro let me know.’

“So I kept applying for the job by myself. And then I also asked Sophia to introduce me.

“They saw my portfolio when I applied, and then, when I was doing the interviews, they found out that I was part of the Fellowship. So we had that in common. They love Startmate. They love what the Fellowship is.

“And I got the job. I couldn’t believe my luck that Jigspace was part of Startmate.

“I started last Monday and it’s been incredible.”

How to actually create a go-to-market strategy

By
Alisha Geary
When Alisha Geary googled “Go To Market Strategy Template”, Google let her down.