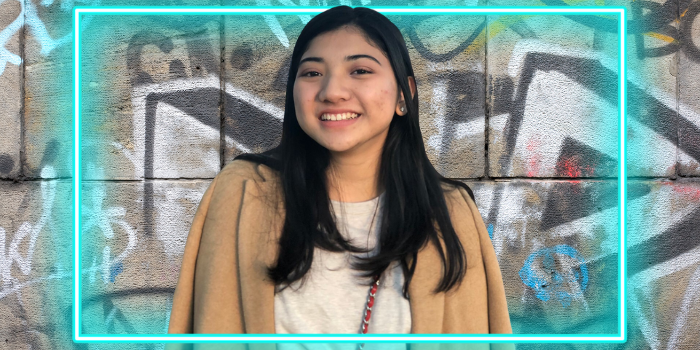 Tsamara Ramadhanti is from Jakarta and comes from a family of accountants (with a few doctors in the mix too). So while tech has long caught her eye, she always saw herself studying business and following in her family’s footsteps.

But one not-so-subtle nudge from her parents, a life-changing university course, and the Student Fellowship later, she has a job in UX and sees herself working in product management after graduation. Here’s how she got here.

Part one: Intimidated by tech

“In high school, which was three years ago now, I did International Baccalaureate, or IB,” Tsamara tells me.

“The curriculum had computer science as a first year subject. I was interested, but when I looked at it, I didn’t understand any of it. It seemed really tough.

“So I didn’t do computer science at school.

“But through IB, I was able to apply to universities in different countries, which was really, really handy. I applied to The University of Queensland and moved to Australia for study about three years ago.”

“I wanted to study business because my mum is an entrepreneur. I thought there was only one choice for me,” Tsamara reflects.

“But my parents sat me down and explained that business is more practical than theoretical, and that you don’t necessarily have to study it. They said I could if I wanted to, but suggested I try something else, whether I was going to use it later on in life or not.

“In the end, I took their advice. I'm doing a double degree — a Bachelor of Commerce and IT at The University of Queensland.

“At the start, people's perspectives on my choice were tough. I think the only people who believed in me were my family. A lot of my friends said ‘I think you'd be better off studying something else’. And, to be honest, I wasn't really sure that I was the type of person who was right for a tech career either.

“But it was the right choice for me.

“Going into IT, I wasn't sure what I wanted to major in, until I did a course called Human Computer Interaction. It was so interesting. It changed the way I think about tech.

“The user perspective is a side of tech that people don't think about.

“At the time, I was living with five psychology students. So when I talked to them about UX, it just got me going.

“I really fell in love with it. And I now major in UX design.”

“I am the kind of person that's never not doing something. I have to do something,” Tsamara tells me.

“I heard about UQ Ventures from a friend. They have a six-week program called Idea Hub that introduces you to startups. You learn about business model canvas and pitching, and they have founders come in and talk about their journeys. That’s where I discovered startups and learnt about Startmate.

“I applied for the Student Fellowship because I thought it would be really exciting to have 20 people around you who want to do the same thing as you.

“It ended up being a little challenging, because it was the MVP cohort and I was the only one in Brisbane and the only designer. But the workshops were amazing. I still watch them and look at my notes.

“Through the Student Fellowship, I heard about Law on Earth. I did some research, and thought it was really interesting. I knew I wanted to be in the team.

“Law on Earth have a really good relationship with Startmate, so I messaged Katie, the Founder, on LinkedIn and asked to be her intern.

“She replied to me three days later and asked if I wanted to come in for an interview. I jumped on it.

“Graduation is actually just one year away now, which is insane to think about.

“I really want to go into product management. But I’m looking into venture capital too. I do a little bit of  finance at uni, so I thought it could be a good match.

“Eventually though, I do really want to start something of my own. I want a career in tech now. And I want to found a startup.”