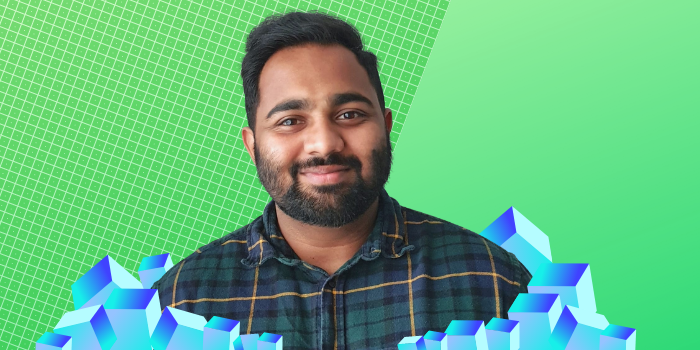 Ajay Prakash was at university many years ago when he spotted a problem on the horizon — one that was inching closer and closer as graduation approached.

The problem? Securing full-time employment at the end of his degree.

A mix of concerned and curious, Ajay started researching whether this was a problem other university graduates were facing too — and what he learnt gave him a purpose that saw him:

Underlying all of his success (and failure) is a commitment to “rapid prototyping and testing”, so in this article, we dive into Ajay’s most successful MVP to date, and his six key learnings about testing a hypothesis as an early-stage founder.

The year is 2014. Ajay is studying theoretical physics and mechanical and manufacturing engineering at UNSW. He and his friends are worried about their employability.

What differentiates people is experience beyond university, and often having skills that universities don’t teach, which has led to “this weird, vicious cycle where they need a job to get experience, but they need experience to get the job”.

Fascinated, he started doing more research, concluding technology is developing at such a rapid pace that, by 2030, 42% of the skill sets required by the workforce will have drastically changed.

He “had a fairly good idea of the problem scopes”, he reflects, but “didn’t know exactly what the right solution would be”, and so edtech startup EntryLevel was born.

“The only way you can verify an idea is sales or attraction. There’s no way to verify, unfortunately, before you build something, but there are ways to shortcut that building process,” Ajay says.

“So then it just comes to rapid prototyping and testing.

“What we do for growth tactics is, we’ll do a session, and we’ll write down every single idea that could possibly work. And we run through them. So we had about 30 different growth ideas.

“Since November, we’ve probably launched and failed three or four things. We did no-resume-recruitment for a bit, we tried a coaching service, tried a bunch of different things.

“One of the tricky parts, to be honest, about joining Startmate was the fact that I didn’t have an idea that needed to be accelerated, in the sense that I knew the problem, and I had maybe 12 different experiments I wanted to run, and we were just rapidly iterating through things.”

Thus far, Ajay’s virtual work experience MVP has proven most successful, and is currently being scaled by the EntryLevel team.

For context, EntryLevel’s virtual work experiences are one-month courses that mimic the real work of a professional, put together by an expert mentor.

But, of course, that’s not where this MVP began, so let’s rewind.

“I had a couple of my friends who wanted to launch experiences with us,” Ajay recalls, so “I made a quick mockup of what it could look like”.

“We just did a pre-sign-up to kick it off. I didn’t even have the curriculum in place. I just said ‘these are the four things you get’, made a quick landing page, kicked that off. And then I implemented a referral loop campaign,” he says.

“The website itself probably cost like $50 for hosting … [and] took us about two days to launch. I hired a designer to clean it up a little bit. But even without the designer, I probably could have got by myself.”

Ajay also hired a community manager for about $800 a month, and spent $280 on marketing, which turned out to be “the biggest waste of time”.

“We just lucked out in the sense that we launched the first campaign, which was a referral campaign, and then posted in six Facebook groups, and I made a content piece to go with it, and then it just blew up from there,” he explains.

“That was the entire launch process. So all in all, a super lean MVP.”

But while the MVP was lean, the learnings were not — and Ajay has six key suggestions for early-stage founders brainstorming, building and testing MVPs.

Towards the end of our conversation, I asked Ajay the question you always ask when interviewing someone: ‘What’s the one thing you would tell someone who is walking the same path as you?’

But while my question is utterly predictable, his answer is a zinger.

“You have to become obsessed with the problem, not your product,” he says.

“I think a lot of people, especially early-stage founders, fall in love with what they’re building, and they find it hard to let go, or to get feedback on it.

“Obviously, you’ve got to care about what you build. But if you’re more in love with the problem, then it’ll be really easy to pivot and to make decisions that’ll innovate and optimise things for your users and customers.”

Ajay also says early-stage founders should “stop falling in love with your customers”.

“Sometimes, I found myself really enjoying spending time with a particular demographic or set of customers, and I found it skews my judgement.

“Just because you like having a beer with a subset of your customers doesn’t mean you should focus all your attention there.

But at the end of the day, it’s “about falling in love with the problem and a job to be done”, Ajay says.

If the advice is to fall deeply in love with your problem, then it goes without saying you’ll need to take it on a bunch of dates, put in the effort to really understand it, and never get complacent.

“There’s a problem scope, and we have 15 different ways we could tackle it. And we’re just going one by one and seeing what works,” he explains.

“It’s a continuous tree of … different permutations and combinations of how the business could work. Because that’s how you like maximise your odds of success.

“You can’t throw one dart, because the likelihood of that dart landing is so low. You need to throw seven darts in a row and just see which one sticks. And then, if something works, scale it.

“In fact, even though we have something that’s working, and we’re scaling it, I have like six other things in the pipeline that we could test at any point in time.

“Those are all different MVPs.”

3. Everyone judges a book by its cover

“My personal belief now is that design is super important. I don’t think you can get away with an ugly-looking product anymore,” Ajay says.

“People are smarter. And people tend to make snap decisions on ugly products.”

Ajay suggests asking: “What are the core jobs to be done? And what are the core features that could service that? And then just make it look as clean as possible when you launch.”

“You could lose people just because it looks scammy. And in 2021 especially, people come from a perspective of no trust, and you’ve got to build that trust, and fast, which was not true a decade ago,” he says.

“If people don’t trust you from day one, then you need to do everything you can to get them to trust you, and then potentially even convert into a paying customer.”

4. Learning to align your incentives

When it comes to collecting feedback, and a lot of it, Ajay adopts a game theory perspective.

“People will always be selfish,” he says.

“I don’t expect anyone to give anything from pure philanthropy at scale.

“If you build a system with 50,000 people, you can’t expect 49,000 of them to act in a way that you want them to out of the goodness of their heart. It just doesn’t work that way. That’s not how modern day economics are built.”

So what did Ajay do to incentivise users? Well, a couple of things — one far more successful than the other.

“We tried to incentivise them initially with money, which didn’t work … If you hang 50 bucks in front of them and say ‘do this survey’, they’ll just do it as quickly as possible, because that’s not really an incentive to give honest feedback.”

Binning that idea, the team decided to award a “critical thinker” badge to those who gave valuable feedback. Already, they had gamified the MVP experience, offering soft skill badges, so it wasn’t too far of a leap.

The critical thinker badge “was just our way of saying, if you’re good at giving feedback, this will show potential employers that you’re really good at critical thinking”.

“That boosted feedback rates exponentially. It was just aligning their incentives with our incentives. And we got clean feedback from that, which was interesting,” Ajay recalls.

“I originally had my doubts about it, but we test everything, even if I have doubts.”

The entire point of building an MVP is continually learning, and it goes without saying that some things aren’t going to work, so Ajay suggests you “collect as much data as humanly possible”.

The EntryLevel team got 10,000 pre-sign-ups with an admittedly vague landing page.

“We had an almost endless supply of people to just keep testing with, which was helpful.”

The EntryLevel team mainly collected survey information: “What country are you from? What is the biggest problem you’re facing right now? What are you expecting out of this?”

Looking back, Ajay says the website was “so vague” that even he didn’t know what people were signing up for.

“Part of that was on purpose, because we’re just testing whether there’s a need for a solution around experience. And then the other half of it was just because we didn’t know what we wanted to make yet,” he explains.

“We also did the Sean Ellis test. So the product-market fit survey. We also did the NPS which, in hindsight, they kind of just say the same thing. So it’s probably not even worth doing both.”

But collecting as much data as physically possible doesn’t mean your learnings should be vague. You still need to collect the right kind of data.

“It was less about platform metrics and more about how people felt about certain things and what features were working,” he says.

“Heat maps and click-through rates and all that kind of stuff, they’re kind of useless without context. If you tell me your click-through rate is 3%, that’s great. But I don’t know what industry, or what the industry standard is. So it’s only useful to collect that kind of stuff if you’re trying to do something about it, or have some sort of benchmark you’re trying to work towards.”

After speaking with Ajay for about 25 minutes, it’s clear his philosophy is to fail quickly and fail often.

But when you’re moving fast, experimenting, building, and culling what doesn’t work, there are bound to be mistakes.

“We sent the wrong email to some people. There were days when I had like 400 support emails because one of my team members screwed up and sent the wrong link,” Ajay reflects.

“But I think it’s also a testament to the fact that you can fuck up, and it’s fine. I wouldn’t be worried about that too much.

“I wouldn’t change anything, because it’s kind of worked out for us.”