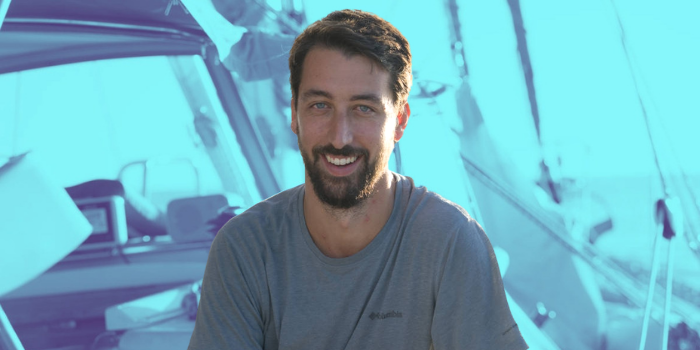 Adam Flynn describes the journey from first engineer at e-commerce startup Wish to VP of Engineering at Seachange as “deeply, deeply, deeply difficult”.

Adam left Wish in 2017, spent two years on a sailboat in the Pacific Islands, and then washed up in New Zealand ready for a new challenge.

The process of honestly answering these questions was gruelling, Adam tells me.

“Any simple explanation of how you get there leaves out a lot of the nuance, because it's a broader process of coming to know yourself, which is a lifelong journey that's difficult and complicated, and two steps forward, one step backward sometimes,” he explains.

Thankfully, loss of nuance aside, Adam was still willing to share his story, in the hope it will be equal parts relatable, motivating and inspiring to the engineers of the scale-up world.

A wish and a dream

Adam fell into startups after doing a bunch of internships, hooked by the tangible impact he was able to have, and the freedom to take initiative and fix any problem he spotted.

When he joined Wish, the startup became a team of four, and what got him through six years of caffeine-fuelled late nights was a dream to eventually sail off into the sunset.

“I always said to myself, one day, when this silly little startup eventually runs out of money and fails, I'm going to get a junk of a boat and sail to Tahiti,” Adam tells me. “I like sailing and I'm going to go have a crazy adventure.”

Obviously, Wish didn’t fail. On the contrary, it rapidly scaled into a massive company.

By the time Wish had reached 500 employees, Adam was frequently asking himself whether his longing for a crazy adventure was real, or if he was lying to himself and pretending to have a dream to motivate himself to keep working.

“I don't love the idea that I'm the kind of person who only uses dreams as a way to manipulate myself into working harder, instead of actually having dreams that I'm going to follow through on,” Adam says. “So I decided to roll the dice.”

“I would trade a crazy learning experience for a year or two of messing around and having an adventure. Then I’d be a sensible grownup and go get a job at Facebook or something,” he says.

“Two years later, I washed up in New Zealand, the world ended, and now I am a Kiwi.”

When Adam arrived in New Zealand, he knew he was ready to build, but it took him a while to figure out what he truly wanted from his next role.

“The process was long and messy. Every time I try to explain it, it sounds so simple,” Adam admits.

He knew he wanted to build a company that would have a positive impact on the world, and that he wanted to work on technically interesting problems with smart people.

“How I got to climate was being on a boat in the Pacific Islands, spending all kinds of magical times on atolls one meter above sea level, and realising that, in my lifetime, best case scenario, they won’t be a place anymore. This was really deeply distressing,” Adam says.

“I arrived there after a whole bunch of months of thinking ‘I have to do this’. It's easy to say, ‘I should be solving this problem’, but you need to feel it on a pretty visceral level. You need to feel like you can't do anything else.

He also knew he wanted to work on a problem that was very technically interesting. “Personally, I thrive on big, complex, technical problems that have a whole lot of different things that you need to keep track of at the same time to make everything come together,” he explains.

After months of aggressively crossing things off his list, Adam landed on his non-negotiables, and everything fell into place very quickly from there.

Adam met Seachange Founder Max Olson shortly after he arrived in New Zealand and the idea spoke to him.

“The technology was deeply interesting. The impact they were targeting was really compelling. Once I got clarity on what I really wanted to do, I realised the company was a really good fit,” Adam says.

“An electric hydrofoiling boat is probably about as interrelated and involved as you can get.

“It’s a really, really cool technical challenge across a lot of different disciplines.

“I love that if we manage to build these crazy electric flying boats that we'll be able to make the world better. And I love doing work that's meaningful and extremely technically challenging with a group of super motivated people.

“There's something really magical about being able to jump in a room on a whiteboard with some really, really smart people and just bang your heads at a problem until you solve it.”

Do you remember what inspired you to become an engineer in the first place? Rediscover that fresh feeling through the Startmate Engineering Fellowship.

How Eddie Atkinson scored a job as Software Engineer at Gridcognition

By
Bronte McHenry
Eddie Atkinson discovered startups at university when a mate took the plunge and has been hooked ever since.

By
Lauren Capelin
Matthew Tracey likes political podcasts, is passionate about simplifying the employee equity process, organises his day thematically and is a Startmate Mentor.