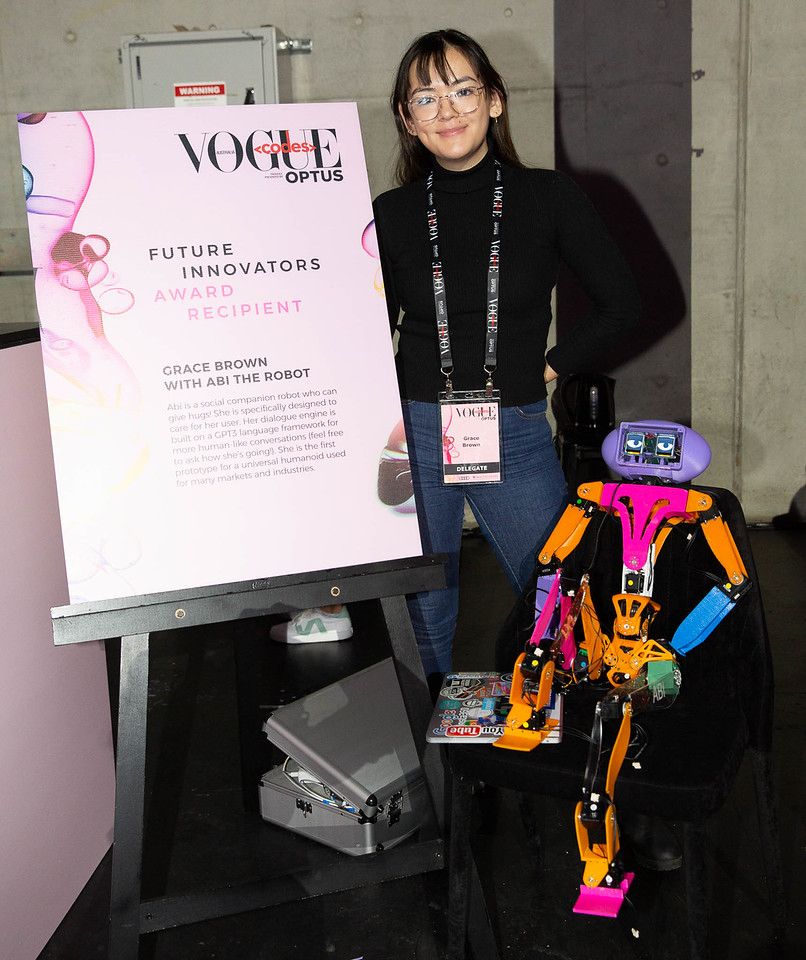 In 20 years, humanoid robot companions will be as common as the humble robot vacuum cleaner, predicts social robotics startup Andromeda.

"We think there's a lot of untapped potential in the connection we can make with robots," Andromeda co-founder Grace Brown tells me.

That character is Abi, a 120cm-tall robot currently being tested out in aged-care settings as a companion for the residents.

Inspired by Baymax from Disney's Big Hero 6, Abi uses computer vision and chatbot technology to give hugs on demand and has already fetched around $10 million in letters of intent from some of the country's largest aged care providers.

This traction is made all the more impressive by the fact Abi started as a student project.

"Abi came about because I was really trying to build myself my own best friend," Grace says.

"It was in lockdown, my roommates had all just moved out, and I wanted to find a project, a physical project, to keep me busy."

In the vaguely apocalyptic embers of late-2020, Grace got to work scoping out the different subsystems needed to bring Abi to life and recruited a team of students from the Melbourne Space Program to begin development.

Co-Founder Tasnim Ahmed was in that original crop of engineers and quickly bonded with Grace over a shared fascination with building a robot people could connect with.

"We were the ones who were immersed and addicted to building it. There's no better word to describe it than that," Tasnim says.

"We're just addicted to this work, and it just made the most sense that we do it together."

Hardware is notoriously expensive when you’re an early-stage startup, so for the first eight months, Abi was just a simulation on the screen of a university computer lab.

That is until none other than Vogue Australia came knocking, naming Grace as the winner of their Future Innovators Award for 2021, and gifting the team a much-needed $10,000 cash prize. This money enabled the team to spin out of the Melbourne Space Program, bring a walking, talking Abi prototype to life, and accept a place in Startmate's Winter22 Accelerator.

"I left my full-time job for Startmate and have zero regrets," Tasnim says.

"In the middle of my heart, I’ve always wanted to do a startup, but I never had the resources or the opportunity."

"The first day I walked into the office around 9 am, Grace opened the door and started dancing from excitement, and I thought 'the circus begins’."

It's refreshing to see a sense of play manifest in Andromeda's work.

Instead of an automaton purpose-built for productivity, Abi is childlike, caring, compassionate and curious. She can give you a hug if you're feeling down, make eye contact and even pick up a conversation right where you left off.

It's no wonder then that Grace and Tasnim take their inspiration as much from masters-level knowledge of mechatronics as they do from Disney films.

"The emotional response people have when watching characters in movies, that's what we're trying to replicate through Abi," Grace says.

"We're trying to build characters that you can personify with, so you can build, not so much a storyline, but an actual relationship with them."

To do this, they've enlisted a 3D artist to develop the concept design for their consumer-grade robot and even connected with Haggai Goldfarb, a global expert in the field of social robotics, who also happens to be one of the original animators of Shrek.

“For more than a century, stage performers and animators have used facial expressions and body gestures of characters on a stage or on screen to tell stories and invoke emotions from their audiences,” Goldfarb writes in a letter endorsing Andromeda.

"Social robotics is a natural extension to what has been achieved through studio animation.

"If developed in the right way, social robotic characters have the potential to be one of the most powerful creative tools to connect and unite people, no matter their beliefs, biases, or interests."

Visions for the future

Set to embark on a $5 million raise following their pitch at Startmate Demo Day, Andromeda will then embark on formal clinical trials and R&D development to bring Abi to market in the next 18 months.

While aged care is the initial target, Grace says Abi has incredible potential to provide an alternative way to connect, especially for young people.

"We've got parents of teenagers with disabilities who are saying that even with just the prototype we have today, they are taken aback by the impact it has for that non-verbal social connection," she says.

"We even have edtech programmes that want to licence our IP to teach kids about STEM.”

“Like, imagine being able to ask a robot how to build a robot?"

If all goes to plan, in the next 20 years, Abi will be a fixture in 5% of households — as common as the trusty robot vacuum cleaner.

"If we could help one city in the world be completely sustained by robot and machine-generated wealth, that would be pretty epic."

"That means everyone in that city would be living a life based on their passions and the things that really matter to them, and everything that sustains society is completely automated by robotic technology."

By
Michael Batko
One of our 10-year goals is to build a 1-million-person technology city in Australia or New Zealand that attracts ambition, ignites innovation, boosts quality of life and fosters human connection.

By
Monique Leung
Careers in startups are generally filled with high levels of risk and unexpected turns. And Sam Wong’s career is no different, writes Student Fellow Monique Leung.