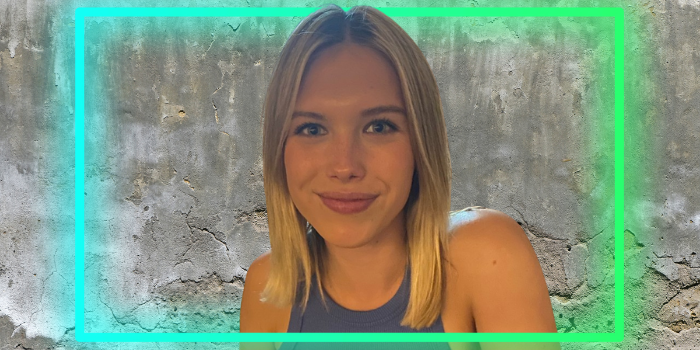 Daisy Johnson has always gravitated toward the unfamiliar — and has the passport to prove it.

She started her university degree in Melbourne, but finished it off in Sweden, for example. She had been working in advertising for four years when she realised she didn’t feel passionate about the career path she was on.

Two years, dozens of podcasts, some hustle and the Women Fellowship later, she has a job as Marketing Coordinator at self-driving car startup Baraja. Here’s how she got there.

“I was born in Japan and I lived there for three years. I don't remember much — but what I do remember is going back nearly every year with my family and finding it really familiar,” Daisy tells me.

“I grew up in Sydney, but I wanted a change at the end of high school. I needed a change. That's why I moved down to Melbourne and went to Melbourne University.

“I actually finished my uni degree on exchange in Sweden. I ended up staying there for longer than expected — for a year and a half — because I was loving it, and I had gotten myself an internship at a film talent agency.

“When I did come back to Australia, I had missed the boat for quite a few graduate application opportunities. But I'd done some internships in advertising agencies in Melbourne, so I figured that was my way into a job.

“I ended up getting a job at an ad agency, and from there, spent nearly four years in advertising in account management.

“It was last year in April, in peak COVID time, that I realised I couldn’t see myself wanting to get to that next level in advertising. The industry is a bit old-school. I wanted to feel like I was having an impact.”

“The Financial Times has a podcast called Tech Tonic. I was listening to an episode and they mentioned a Berlin startup called Infarm, which builds vertical-farming units. It captured my attention. I thought, this is just a brilliant idea,” Daisy says.

“From there, I started listening to more and more podcasts about various tech and startups.

“That was when I started my search for a job at a startup. I realised that what I was wanting was what a startup would give me — a bit more autonomy, intellectual stimulation, and the ability to have an impact in some tangible way.

“I heard about Startmate through a friend — Juliet Kirby — who also did the Fellowship. I then did my own research, and realised it was a ticket into the startup ecosystem.

“I actually applied for the Fellowship last year, and didn't get in. But that gave me more of an impetus and drive to really network within the ecosystem as much as I could without Startmate’s help. And I managed to do that.”

“I obviously got into the Autumn cohort, and I really loved it,” Daisy tells me.

“I actually really liked it from an angle that I didn't think I would make the most of, which was connecting with other Fellows in my network.

“I thought I would really focus on the sessions, because I was studying part-time and working full-time. I just didn’t think I would have time to connect with other Fellows. But  ended up getting so much value out of connecting with other Fellows in my cohort.

Part four: Helping to build something

“It was towards the end of the program that Cristabel sent me a message and said: ‘Would you be interested in meeting with Paloma?’ I said: ‘Sure!’ But at this point, I hadn't really delved too far into what Baraja was,” Daisy explains.

“When I started talking to Paloma, I was like, wow, she is so smart, really interesting and funny. And the company she's describing sounds very cool.

“At this stage, I was very set on getting a job at a later-stage startup that had already scaled. I was looking at opportunities at Canva and Uber, thinking that was what I needed at this point in my career.

“But Paloma helped me see it from another angle. She showed me that I will be helping to build something.

“I’ve been working at Baraja for a month now. It’s different. It’s challenging, interesting and exciting. I will be able to see the impact of what I am doing.”

By
Royina Bakshi
Lydia and Esther have both been athletes since they were teenagers. Now, they're also the co-founders of female fitness startup Femmi.

How syndicates benefit founders, investors and the ecosystem to boot

By
Kylie Frazer
Syndicates can benefit founders who are unable to secure much-needed capital at their earliest stages and angel investors who may not be able to access the cap table directly.