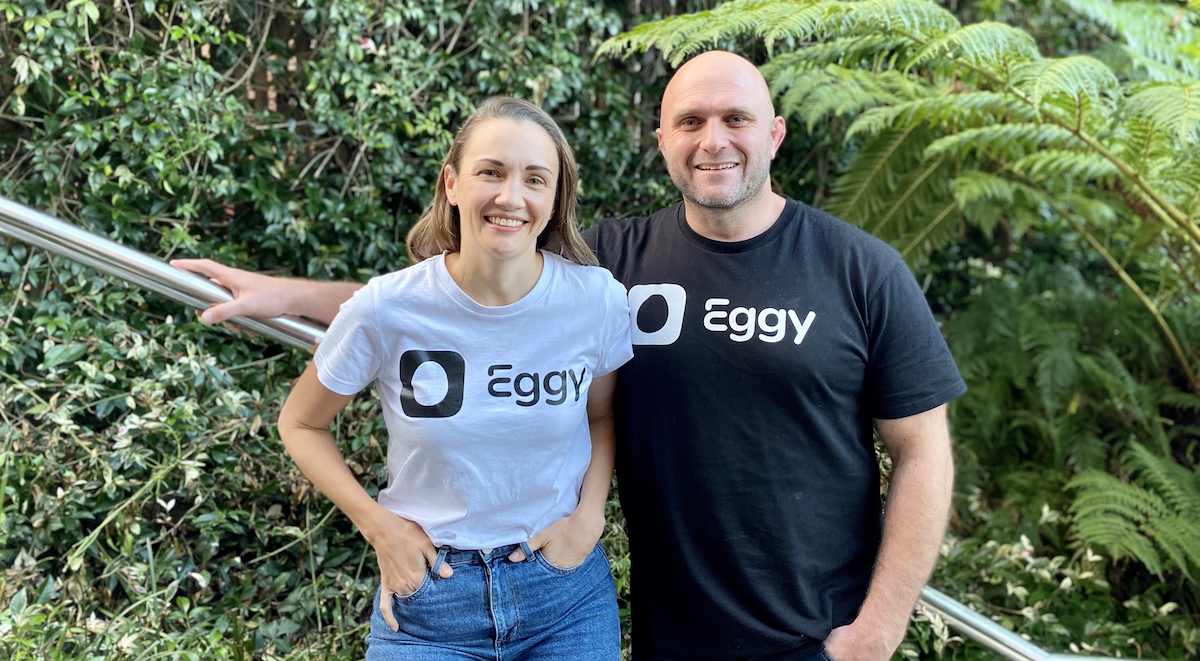 Last month, Crunchbase News reported that overloaded families are turning to famtech, and VC funding is following — but this isn’t news to Eggy founders Kate Morgan and Kirk Reynoldson.

In fact, this husband-and-wife duo has been preparing for the famtech boom for three years.

Underpinned by neuroscientific research, Eggy serves as a source of truth for your documents, screenshots, bills, appointments, party invites, reminders and grocery lists.

Today, there’s a freemium version as well as individual subscriptions for families. Next on the roadmap is connecting users to their communities, such as schools and amateur sporting clubs, with in-app automations to follow, and partnering with service providers to enable in-app payments after that.

And then? Global domination of the famtech category, of course.

Back to where it all began

Back in 2019, Kirk and Kate’s family-of-five was governed by a mix of post-it notes, email accounts, cloud drives, calendars and mental to-do lists. It was a compounding mess that saw their mental health decline and Kirk cop a $1000 fine for forgetting to pay the car rego.

In desperation, the duo tried to find a product to help them make sense of the madness, but they found nothing suitable — and so, they set out to build a solution.

“Our lightbulb moment was when we read The Organised Mind by neuroscientist Daniel Levison,” Kirk tells me.

“He talks about the problem of cognitive overload in today's world, where we’re just constantly ripping through information. The book helped us to clearly articulate the problem we were trying to solve.”

“It tapped into the problem, but it also provided the solution of taking things out of your brain, and putting it into an organised, clever system,” Kate explains.

“We know you can set up your own system of categorisation with a cloud drive (like a Dropbox storage system) but even setting that up is hard to think about.

“Eggy makes it easy by suggesting categories for the main areas of life admin. But it also gives people the flexibility to change these categories, because the science says that everyone categorises their information differently.

“Eggy takes away decision fatigue, but also provides flexibility if you want to tailor the app to make it your own.”

The first iteration of Eggy launched in 2020. It was admittedly “very basic” (as all MVPs should be), but that didn’t stop users from getting very excited.

A noise-cancelling approach to feedback

Kate and Kirk have been collecting user feedback from day one, enabling them to build a sleek, usable app with absolutely every feature people need, and absolutely nothing else.

In fact, they’ve personally managed over 2,000 pieces of customer feedback, and got “absolutely slammed” with requests and suggestions when they launched a crowdfunding campaign and gained 230 new shareholders.

But as all founders know, the price of lots of feedback is feelings of overwhelm and contradiction. In fact, knowing who to listen to, and who to politely ignore, is “the biggest challenge for a startup, full stop,” Kirk admits.

“We’ve learnt to be ruthless with who we listen to. We listen to people who have been there, and actually done that, and actually solved the challenge themselves,” he explains.

Kirk credits their Head of Product, Brent Lacey, for providing them with a framework to assess feedback. In short, you rate feedback according to whether it meets business needs, customer needs and technical needs. If feedback ticks the box in all three of these categories, you then work it into your product strategy.

“We probably weren't as good at this in the early days. We probably took on board more feedback than what we should have,” Kirk admits. “But we try to look through everything through this lens now.”

“When we told people in the startup world we were solving a tech problem with zero tech experience, they certainly laughed,” Kate says.

“But the people who know us know that when we say we’re going to do something, we get it done,” Kirk adds. “Katie has done her PhD. I was lucky enough to play professional sports. We've got proven success in low-probability-success environments.”

And ‘get it done’ they have.

Plus, they’ve somewhat unintentionally built a community that would make community strategists drool, and fortified a stickiness that sticks with you.

They’ve also intuitively created a brand so authentic it’ll be the envy of brand marketers everywhere (see below), and they’ve got a team so loyal and bought-in that it feels more like a family.

But this is just the beginning, Kate tells me. This duo won’t rest until every household is a happy household.

“We have people who cannot live without Eggy now. I had someone email us last night to tell us the app has changed her and her husband's life. She literally said those words,” Kate says.

“There's still so many things that we want to do with Eggy, but to hear that feedback is so motivating.”

By
Frederic Leforestier
We're proud to invest in Andromeda as part of our Winter22 Accelerator cohort. Here's why.