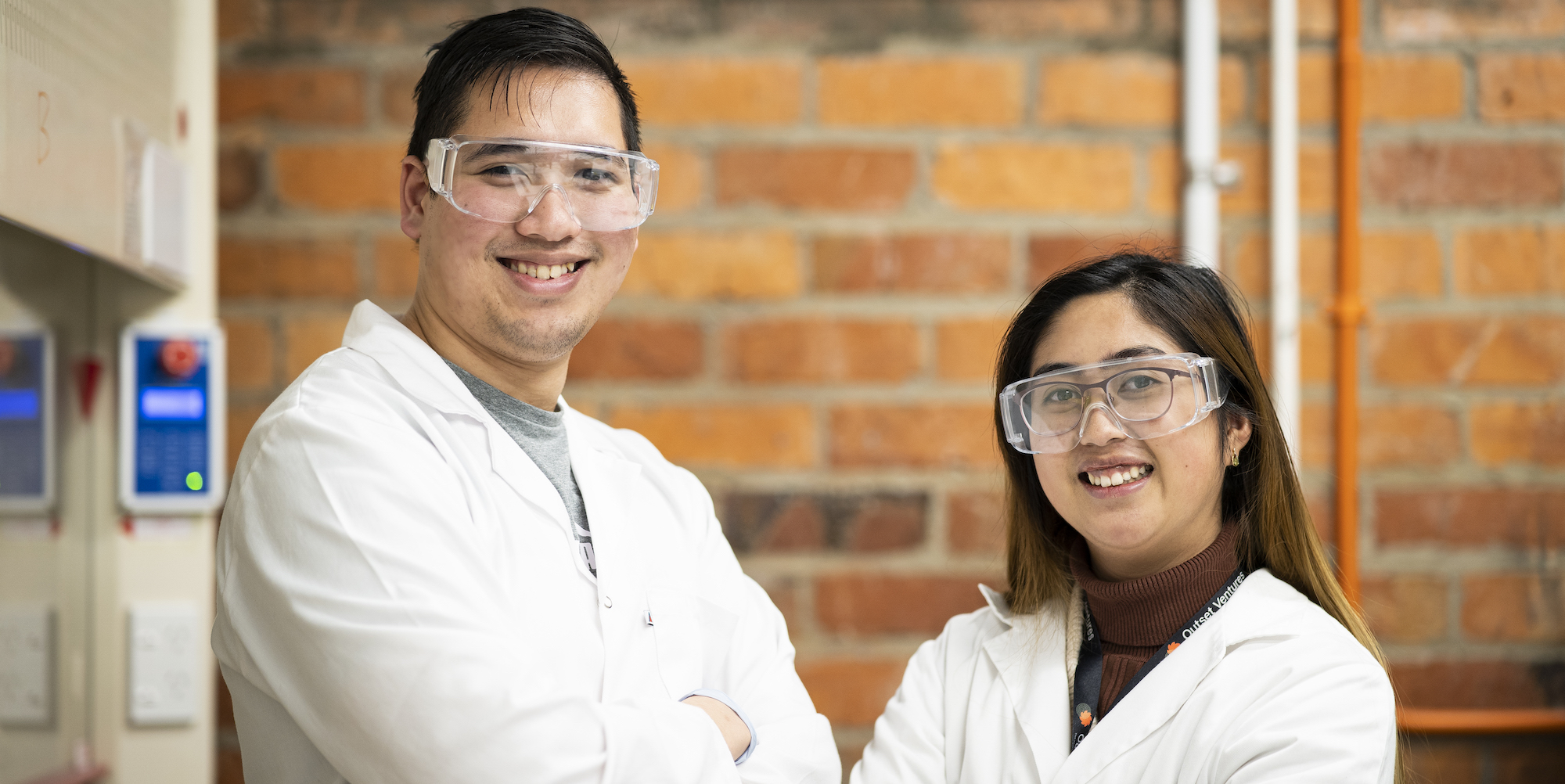 It was 5pm on a Monday when I descended into the Outset Ventures basement and first encountered what is affectionately known as "the creepy finger prototype".

Stood proudly atop the Dennisson Technologies workbench, the index finger suspended in air and attached to a tape-like material was difficult to miss. Little did I know, I was looking at trailblazing technology that will redefine the limits of human capability.

"We're creating a muscle that you can wear on your body. If you have a stroke or damage the nerves in your arm or leg, you can put it on like clothing, and it will move your body for you," Dennisson co-founder Kim Bañez tells me.

I donned some neon-orange glasses and eagerly observed Kim put the prototype to work.

In response to light, the tape-like material moved the finger up and down resulting in a slightly disconcerting come-hither motion (the inspiration behind ‘creepy finger’ now apparent).

Kim and Anvil tell me this material can move up to 900 times its weight. With the right layering and fit, you could use it to build a real-life super-suit.

"You can grip an apple in your hand, but if you try to crush it, that's very hard. Now imagine wearing a second pair of muscles on top of your own that are thin and spandex-like. You hold that apple and squeeze it, but now you can crush it," Anvil says.

"We are augmenting human capability."

“It’s about my father and who he represents”

Arguably more striking than the creepy finger in action is the compelling “why” at the heart of the Dennisson story.

For Anvil Bañez, the mission is simple: to help his father walk.

"My father has polio, which meant that from a young age, he couldn't really walk on his left leg."

Despite the physical barriers, Dennis Bañez (the namesake behind Dennisson Technologies) became an award-winning powerlifter, opened a gym and raised a loving family.

"He won competitions and was a champion. He was bench pressing three times his own weight."

Inspired by his father's resilience, Anvil set out to create a "superhero spandex" that Dennis could use to walk instead of a leg brace. A mechanical engineer by trade, Anvil has been working on exoskeleton prototypes since his fourth year of university.

"I wanted to be an engineer and solve amazing problems," he says.

He then completed engineering officer training with the Royal New Zealand Airforce. When COVID hit, and humanity was forced into a period of reflection and questioning, Anvil too stopped to think about his next move.

"I joined the military to help people, but there was one person that I hadn't helped yet… my father. Proof of concept isn't gonna help anyone, you know? And so I started Dennisson."

Partners in life, science and business

Driven by curiosity and a desire to create, Kim became a chemical and biological engineer.

Kim and Anvil met at university, started dating in their third year and were married by 2019.

Before creating the world's next super-suit, Kim was hand making and selling clay flowers and jewellery — with a chemical composition of clay she made herself, of course.

"I always wanted to have my own business. It didn't matter if I was gonna be a painter or a florist — I just wanted to do something creative, be myself and make people happy," Kim tells me.

"I love learning how things work so I can make them myself. I find a lot of freedom in that."

She started helping Anvil with Dennisson in late-2020 and became Chief Technology Officer (CTO) in 2021.

For Anvil and Kim, experiencing the entrepreneurial journey as husband and wife has made their relationship as co-founders (in life and business) stronger.

"Doing it with Anvil is so much more rewarding. He understands the whole journey, and I get to spend time with him."

“I get to do this with my best friend Kim and that's a really valuable thing. Being able to create a positive impact in the world from test tube to commercial with the person you are spending your life with… it makes me happy to share this journey with someone I really love”

One platform, one million applications

Though his lifelong mission is to create an assisted-mobility device, Dennisson's short-term direction changed in June 2022 after Anvil had a life-changing shower thought.

"I realised that we're a wearable platform," he reflects.

And so Anvil and Kim began to plan their first product: force feedback haptic gloves.

In plain English, this means a pair of gloves that lets you touch objects in virtual reality and instantaneously feel their shape, texture and weight as if they were real.

Why does this matter? As the popularity of virtual reality technologies increases, big players including Meta are looking at ways to enhance immersion in virtual reality. While graphics and sound have improved significantly, touch lags behind in quality and affordability.

"Technologies that allow you to feel are at least $5,000, and even if you buy those, they're not compatible with any games. So they're basically not usable. They're only useful for industry, and there's nothing in the consumer space because of the price barrier."

To virtual chess and beyond

So what's next for Dennisson? Unleashing the power of the actuator — first and foremost, through virtual chess.

If the word actuator means nothing to you, it should. Simply put: actuators move things. They are everywhere, making your car move and your cell phone vibrate. They are essential to the function of multiple industries like aerospace and production.

"We've planned a series of prototypes that showcase the actuators' true capability. One will focus on strength, one on speed, one on distance, and one might be a blend of all three. The other MVP will be a two-finger haptic glove — enough to play virtual chess," Anvil explains.

"I want to get my technology in the hands of decision-makers. I need them to feel and believe what we are doing."

And after that? Complete and total disruption.

"We realised that it [the material] could apply to any industry that needs a low-cost actuator because we save cost, weight and space," Anvil says.

Dennisson has created a lightweight, low-cost way to move things. The uses for this technology are infinite and bound by imagination alone.

By
Lauren Capelin
Matthew Tracey likes political podcasts, is passionate about simplifying the employee equity process, organises his day thematically and is a Startmate Mentor.