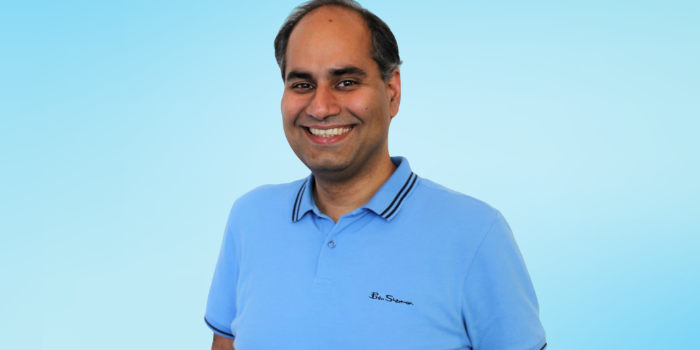 It is rare to meet someone who not only has a calling to serve a purpose bigger than themselves, but who is also willing to overcome insurmountable odds in this pursuit.

Hitesh Mehta is one of these people.

He has a vision to create a better and more equitable healthcare system, reducing preventable deaths to zero, and through my conversations with him as an employee at Nutromics, I’ve learnt about the value of persistence when it comes to your dreams.

A vision is born

Hitesh grew up in Africa and Europe, and as a result, witnessed some of the best and worst healthcare systems in the world. Being a person of colour, he also witnessed wide disparities in how he was treated within each system.

“When we lived in London, my grandmother visited us and had a stroke,” he reflects.

“My parents rushed her to the hospital where they had to wait in the emergency room for hours. Doctors refused to accept that she had a stroke and wanted to send her back until she had a stroke right in front of them.”

Experiences like this showed Hitesh the painful reality of healthcare inequalities from dynamically opposite access points. This is why, early in his corporate career, Hitesh pursued opportunities to work with the healthcare and social welfare industry.

“I have always felt a pull to do something that makes the world a better place,” he tells me.

“That desire shaped my corporate career, where I undertook projects such as rolling out a state-based Disability Support program in Queensland (prior to the introduction of the National Disability Insurance Scheme) and working on the rollout of the Affordable Care Act in Minnesota.

“However, there was always the question of how I could have a bigger impact.”

Any Indian migrant to Australia will tell you that there is a lot of pressure to live a certain dream. I’ve experienced it myself, and it can be summed up as ‘a 9-5 job, a house in the suburbs, a partner and two kids’. Deviations from this dream are considered to be risky and foolhardy endeavours, and the external pressure is often so immense that few want to challenge it.

Hitesh was initially hesitant to go against cultural norms as well, especially given he had a young family. It took him a few attempts to find the courage to make a full-time shift from corporate consultant to entrepreneur.

“I remember the day I told my parents and extended family. Up until then, I had been quietly working on the idea with my co-founder Peter Vranes in my free time, without anyone, apart from my wife, knowing,” he reflects.

“Early validation, in the form of being accepted into the MedTech Actuator program, gave me the courage to let others know. My wife has always supported me, and I was grateful for that, but I was still nervous.

“I told my family that I had to pursue my dream with Nutromics and that they could either support me or get out of my way. Luckily, everyone was very supportive!”

Hitesh stepped into the role of Co-CEO alongside Peter, and through multiple investment rounds, competitions and investor meetings they together dealt with a range of issues, from scepticism and responsibilities to racism.

“The startup world is definitely a challenging one to operate in. Unlike corporates, there is no safety net when it comes to funding or resolving issues. You are accountable for every decision, and that responsibility can feel quite heavy,” he says.

“At the same time, you’re racing against the clock to hit milestones and demonstrate progress before you run out of money.

“My experience in consulting made the transition easier, however, it is still a challenging transition.”

Since its inception in 2017, Nutromics has grown to a team of over 25, won awards for innovation, and raised $10 million to date. The company expects to launch its multi-analyte wearables in the market by 2025.

Hitesh believes there are two key tools that have contributed to his success as an entrepreneur.

The first is grit.

“There will be times when you will interact with individuals who will say no to you because of their negative cultural and social biases or even just a lack of faith in your idea,” he explains.

“If you give this too much attention it will stifle your ability to be an entrepreneur and do your job properly. Grit is essential for success. You must have the courage to back yourself and persist. At the same time, you must learn what you would like to avoid at your own company.”

Practising what he preaches, Hitesh is a champion of diversity and inclusion at Nutromics. The team has members from Indonesia, Iran, Ghana, Brazil, the United States and New Zealand, to name a few.

Team members also come from varied backgrounds, from engineering to marketing, and every team member is given the freedom to take ownership of their roles, regardless of their level of seniority. Speaking from experience, I can say ‘fail fast and learn fast’ is part of life at Nutromics.

The second tool for success is a growth mindset.

“In the first few years of Nutromics, Peter and I were the accountants, the researchers, tech leads, the salespeople, the marketers, and even the cleaners. We learnt all we could from reading scientific papers and by seeking out the best experts to learn from them,” Hitesh tells me.

“In short, we did not ‘stay in our lane’ based on our backgrounds and experience, because that is what we knew already and were good at.

“As the team has been growing, we have been able to delegate more roles. However, even now it is key to have a growth mindset to be agile and adapt. If you have a fixed idea about the skills you possess, about how smart you are, and the tasks you can do, the startup world may not be for you.”

Hitesh has traded his 9-5 in for a 24/7 role and has never looked back. He’s had many highs and lows, but says Nutromics’ growing impact makes it all worth it.

By
Bronte McHenry
“I didn't go to university because I just didn't know what I wanted to study there. It was the best choice I’ve ever made, even if the motivation might’ve been more rebelliousness or indecision than insight.”