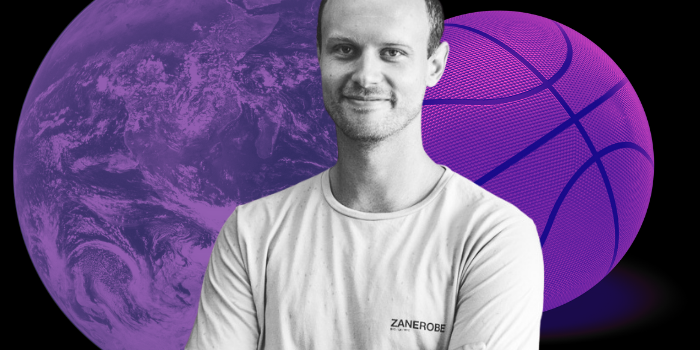 LiGR Co-Founder Luke McCoy might be playing the sportstech game, but he isn’t worried about his competitors.

And in the five years he’s spent building LiGR, he’s come to appreciate the benefits of building a team in stealth before going pro.

Shortly after he announced LiGR’s $2.1 million pre-Series A funding round, we sat down to have a chat, and the conversation naturally segued to protecting your IP, building a startup in Australia, strategic partnerships and competitors.

So, here are Luke’s three tips for Australian founders in the early stages of building a global company.

We’ve all got seconds on the clock

More often than not, early-stage startup founders spend sleepless nights worried about competitors, IP and whether they can execute their ideas fast enough.

Luke was no different, but with hindsight, he says these concerns are a waste of time.

“It’s very true that everyone worries more than they should when it comes to competitors. We struggled with it early on — conceptually, more than practically,” Luke tells me.

“Everyone thinks that other people have the time to build their ideas. But they don’t.”

And there’s a simple reason for this, Luke says.

“You are time-strapped and under-resourced at all times. And that’s exactly true of all your competitors as well.

“Plus, they aren’t you. They're not building with the insight you have about your product, your customers and how you're going to achieve product-market fit.

“In an industry like ours, it’s really about building a great product and knowing your customers deeply.

“Focus on that and don’t worry about potential competitors.”

Backing the Down Underdogs

Australia is a massive land mass, in the world’s worst time zone, with a tiny slice of the world’s population, but this makes it a great place to build a global business, Luke says.

“I’ve heard contradictory opinions on whether you should get into the US early, or wait and avoid launching a terrible product,” Luke tells me.

He’s opted for the latter approach.

LiGR is a live-streaming technology solution initially focused on the sports market, which means Luke has been building a product for the US market from day one.

“In the US, they have college sports, high school sports, the minor leagues, the amateur leagues. It’s massive.

“In Australia, we predominantly follow our five top sports at the professional level. There's a fairly large drop-off after that, and almost no national following at youth level.

“So we are building a product that we think could be wildly successful in the US, but kind of doing it in stealth.”

That's a benefit to launching in Australia, Luke explains. It’s a test market which will eventually be a small slice of your bottom line, meaning you can launch earlier and afford to make some mistakes.

“What they do care about, however, is how quickly you secure some of the major players and major clients within your launch market,” Luke explains.

“In Australia, we pretty quickly moved from football to cricket, to rugby league to basketball, all while we were bootstrapped.

“Clearly there was a need for what we were doing. That was valuable to a VC.

“That’s the benefit of building in Australia. You can prove product-market fit as well as pace to market.

“If you've scaled that fast and picked up that number of clients in Australia, US VCs won’t care what the revenue is, because they’ll know the multiple is X.”

LiGR’s $1 million seed round wasn’t about money, Luke tells me. It was about validation.

“AE Live was the lead for our second round, and they were a strategic lead.

“AE Live provides the graphics and in-game sponsorships … for the FIFA World Cup, the Cricket World Cup, the Origin Series here in Australia for example.

“They are involved in what's traditionally been called ‘linear broadcasting’. It is a custom and service-orientated industry, where AE use dominant render engine technologies to design, build and deliver on broadcasting graphics requirements.

“We sit just underneath that. We’re an operating system for live streaming with a heavy feature on graphics, data integration and in-game sponsorship that serves the growing demand of 'non linear' broadcasts and live streams.

“Where AE Live stops, we come in, and then we go all the way to the single camera broadcast and automated broadcasts where there's no human involved at all.”

Taking on investment form AE Live therefore enabled the LiGR team to present a full-tier offering to broadcasts and sports organisations, while validating themselves in the global market.

“Honestly, the validation was what mattered most,” Luke admits.

“Revenue or great partnerships was secondary. It was about the fact that we could walk into a meeting and validate ourselves and our technology to some of our more enterprise level clients.

“Their investment indicates the future of broadcasting, and we were it.”

Circling back to our earlier conversation about competitors and IP, I asked Luke if he ever felt hesitant about giving behind-the-scenes access to a global company.

“AE Live has a completely different business model to us,” he told me.

“They're a human-operated service company, which is what is required for large outside broadcast productions. We're a self-serve SaaS company.

“My advice to founders is to just focus on your customers and build a solution for them. Don’t worry about your competitors.

"Ideas mean nothing without execution.”

By
Harshdeep Kaur
Zara and Sam just wanted to help their friends sound intelligent when they went out on dates. Now, they run a rapidly growing news platform followed by over 365,000 young people.

By
Bronte McHenry
Tractor Ventures Co-Founder Matt Allen is on a mission to help founders hold onto as much of their equity as they want to, for as long as they like.

By
Bronte McHenry
There’s a narrative in startupland that all you need to get an idea off the ground is a stellar founding team. Pory’s story flips this sentiment on its head.