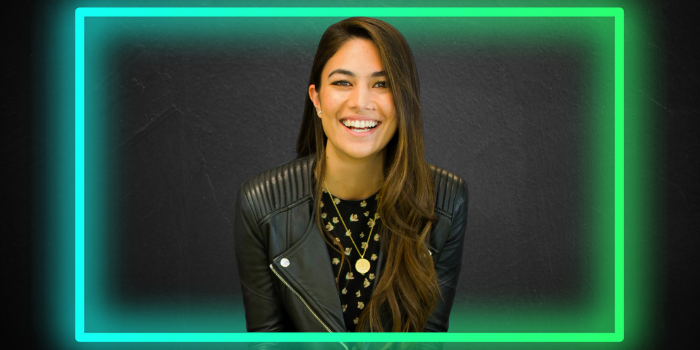 Vanessa Iezzi was born and raised in Sydney. She’s warm, courageous, passionate and humble, and growing up, was usually the person her friends would turn to for advice. In hindsight, it makes perfect sense she ended up in the people and culture space.

But her journey to her dream job is a little atypical. She started her career in office admin straight out of high school, before securing her first people and culture gig with passion and vision alone.

Four roles, half-a-dozen steep learning curves, some amazing bosses and the Women Fellowship later, she has her dream role at Carted. Here’s how she got there.

Part one: A light bulb moment

“Straight out of high school, I really wanted to start working full-time. My career actually started in office administration,” Vanessa tells me.

“Eventually, I found myself in a top-tier law firm, where those on the floor didn’t even know who HR were. I thought, ‘there's got to be a better way for HR to connect with their people’.

“It's almost like I had a light bulb moment.

“I wanted to create a really nice, safe environment for everyone to enjoy coming to work. I wanted to ensure people had a go-to person when they needed it, a function that genuinely cares about people, maximises talent and creates great experiences along the way.

“This is the moment I set off into the P&C (people and culture) space.”

“Finding a role in the people and culture space, when I had zero experience, was super hard,” Vanessa reflects.

“I had to pitch my vision and say: ‘This is how I view people and culture. I want to be part of a team that cares about people and will do whatever it takes to ensure I pick up the necessary skills along the way.’

“It got to a point where I interviewed with a company, and I outlined my vision for how I viewed a people and culture team. It really resonated with them.

“My soon-to-be manager took a chance on me. She said: ‘You've got the attitude. That’s what I want on my team. You'll learn a lot on the job, and I think you’d be a great fit.’

“I'm very, very lucky that I had her as my very first manager, because she really moulded me.

“She gave me the opportunity to shadow the P&C business partners. I was able to pick their brains and learn how they tackled problems and their approach to connecting with their team. I was able to gain visibility of being in a great environment and learn about processes and frameworks that empower teams.

“I was also exposed to organisational development, and the building and designing of HR programs and initiatives.“I was able to watch an amazing learning and development team transform leaders into people who lived and breathed their values.

“I have also been lucky enough that in all of my roles, I’ve had opportunities to complete external training via conferences, people programs and courses that allow me to continuously gain knowledge, upskill and stay on top of industry trends.”

“I was at Grant Thornton for over a year and a half before one of the companies I used to work with reached out,” Vanessa says.

“They said: ‘We are looking for someone to come in and build the people function of our new dev company.’

“At this time, I was just a People and Culture Coordinator. I didn’t think I had the skill set to build a people function, but I knew the company. I saw it as an amazing opportunity, and one where I could shift from learning and shadowing, to designing and executing.

“It's probably one of the most rewarding jobs I've ever had, because I was able to learn how software engineers operate and also the importance of building the right culture, environment and people relationship, at the early stage.

“It was a very big learning curve and gave me a great foundation into what it’s like to work at a tech startup. It also fulfilled my curiosity around why people behave the way they do, which I would then take and turn into employee experiences.

“I would go to the engineers and ask: ‘Talk to me about front-end development and back-end development. What’s involved?’ And they were so open to doing that. I would sit down with them 1-on-1, and they would take the time to show me and educate me. It was so nice getting to know them individually and also how passionate they were about coding.

“In the role, I learnt what it takes to build a great culture from the ground up, and how to avoid a cookie-cutter approach.

“You could say, ‘I absolutely love what Canva does, let's just take that and apply it to our company’. But I truly believe you need to get to know your company, your people, and build your own unique culture. That is what will make it successful.

“I had a lot of trust from the CEO. I got to do things I never imagined I would be doing at that stage. I was designing the employee lifecycle and employee experience, creating an end-to-end recruitment process to allow our team to scale and scale quickly. I was completing an office refurb and working with the Head of UX to redesign our brand. I was defining what we were going to be known as and what our employer brand truly represented.

“I was building and growing a P&C team, and eventually, was in a position to mentor someone reporting to me.

“When I started the journey, the team was only 20, and I was able to help shape the company’s growth to over 100 people.

“It was the best team, and the best job.”

“I really wanted to do the Fellowship to be part of a great network within the startup ecosystem and learn from the best,” Vanessa tells me.

“I haven't followed your typical pathway. During the program, it was inspiring to hear everyone's stories, as it showed that there really is no one correct path to follow.

“Through Startmate, I got introduced to Carted and the founders. Shortly after meeting them, hearing their vision and being offered a role, I immediately knew it was the right career decision for me.

“At Carted, I'm reporting to Holly, who's the CEO, and she's absolutely amazing. I've never worked for a female founder, so that's super exciting.

“Her vision for what Carted will be is so inspirational, and I’m so grateful to be part of the team. I learn from her everyday and I can see the impact and difference I get to make within the company.

“I know it sounds a little cliche, but the role at Carted is a dream role for me.”

By
Angela Huang
In the first week of the W21 Student Fellowship, the Pitchblak team ran a no code session. Here are Angela Huang's takeaways.