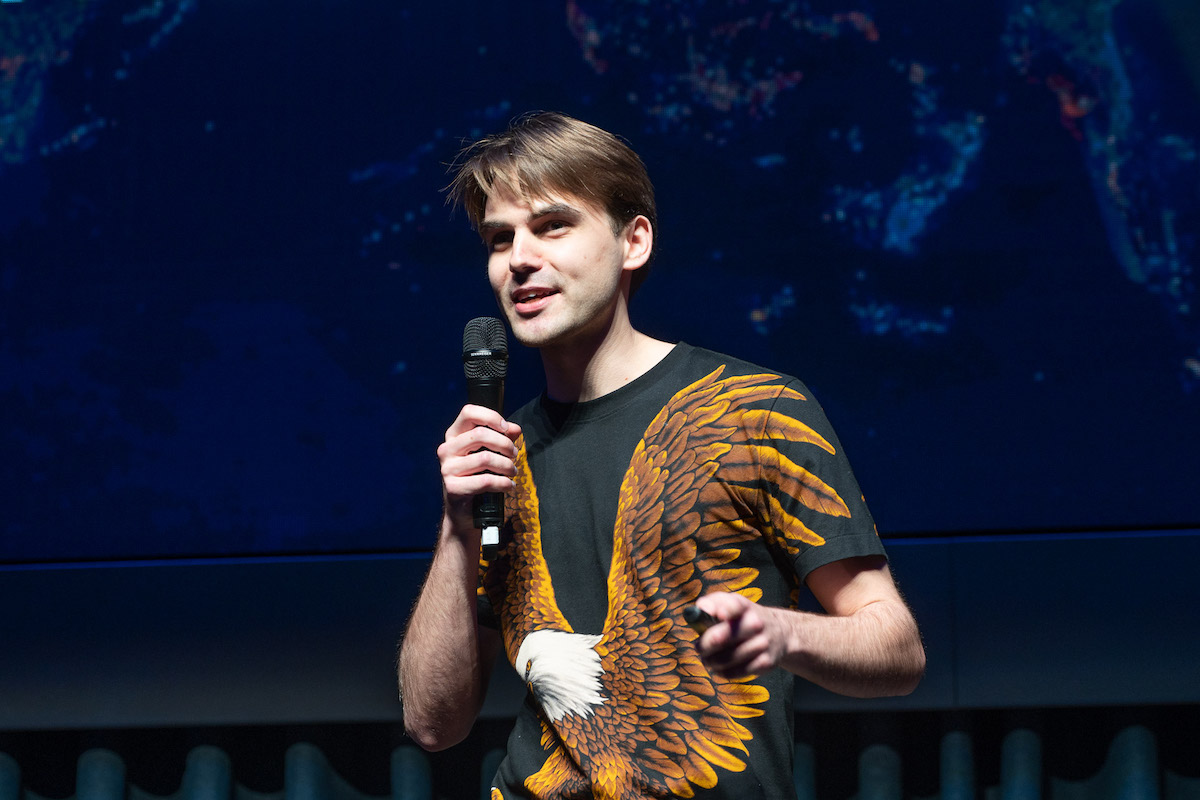 Billy Jeremijenko and Nelson Smith met in the Startmate Engineering Fellowship. The duo bonded over a love for space, the natural environment and lasers, and then founded Aquila.

The duo are doing their “life's work” at Aquila. Billy, the 22-year-old with a degree in Maths and Statistics, reminds you of a young Elon Musk. Nelson comes with 3 years of experience working as an actual rocket scientist.

The idea for Aquila, while quite complicated, boils down to a simple explanation: to create the internet of energy.

Billy and Nelson will do this by utilising a satellite network surrounding the earth to beam energy where it needs to be. It will be an entirely renewable and global energy system. Take a moment and think about that.

While the earth can generate enough power to sustain humankind’s demand, the challenge is getting power to where it needs to be. If Aquila's long-term goal becomes a reality, Australia could generate surplus power in the outback and distribute it to other nations that need it.

Taking it a step further, offshore generators, like large wind farms or floating solar, could be constructed, generating power that would be beamed to space. Energy markets would then establish the highest bidder, and it would be beamed down to where it’s needed most.

A pertinent example right now would be sending spare energy to Western Europe. It’s an audacious goal, but so was providing internet to the world via low-flying satellites — and now we have Starlink.

The use cases don’t start and end with high volume power distribution.

Energy redirection could be used to power transport while in motion, for example. Much like a fighter jet being refuelled mid-flight, energy could be targeted at aeroplanes while they’re flying in the air. In fact, the Aquila team will work on providing energy to flying drones before they look at their space power network.

It’s not smoke and mirrors

The ‘internet of energy’ will rely on tech that is mostly available already. Solar and wind for energy production. Power storage solutions such as batteries. Specialised light-emitting diodes for beaming. Satellites for rerouting power to where it needs to be. The lasers produced by the diodes must be directed towards a target with extreme accuracy.

To aid with targeting, Aquila will rely on software similar to that already used in the military or astronomy. The hardware that absorbs the laser's energy and stores it is similar to standard solar panels.

Aquila is relying on several technologies becoming economic at the same time.

A decade ago, Aquila’s idea would have been considered science fiction. But today, it’s plausible.

Billy and Nelson are fully aware their goal is audacious. They’re aware that the seed funding they’ve accepted will not get them into space. It will, however, get a proof of concept up and running, which should be enough to attract the next round of funding where they’ll have another milestone goal. It’s a similar approach to the guy who traded his way up from a paperclip to a house.

The short-to-mid-term goal is to power drones via a laser system. The ideal proof of concept would be a drone that never stops flying, it’s charged entirely by a laser below.

From here, the next phase is a simple (but also not so simple) step up. The drone will become a plane, and the laser below will be a network of lasers.

The first application Aquilia will target is electric vehicles. The focus in the short term is small drones but will extend out to larger vehicles encompassing cars, trucks and aeroplanes. Electric vehicles are severely limited by their range. Long-haul flights are not currently viable to become electric but a key enabler could be found in Aquilia’s technology. As the planes fly, a ground-based network of lasers could top up their energy storage through inflight recharging.

Regional connections can also be established. Remote sites such as regional towns or mining sites could be connected to power via the satellite grid. Regional towns and remote locations may often operate their own energy generators which are very inefficient. Looking at developing nations, significant numbers of the population are without electricity.

The distribution of renewable energy generation could spark and fast-track the transition away from fossil fuels. Elon Musk believes a “10,000-square mile solar farm in the southwest desert, could power the entire country (USA)”. On top of this, balancing the grids between nations would become very simple. Australia could send power to any nation on the planet without being limited by power cables or geography.

The future is bright

Mass electrification of the planet is front of mind for developed and developing nations. Billions of dollars are being spent on energy production — with billions more to be spent on the infrastructure network.

Aquila could help speed up the transition away from fossilised fuels. With many of the storage and transmission projects, Aquila provides a faster, cheaper and more efficient way to deliver energy to the right place at the right time.

Want to read more from Will Richards?

By
Monique Leung
Careers in startups are generally filled with high levels of risk and unexpected turns. And Sam Wong’s career is no different, writes Student Fellow Monique Leung.