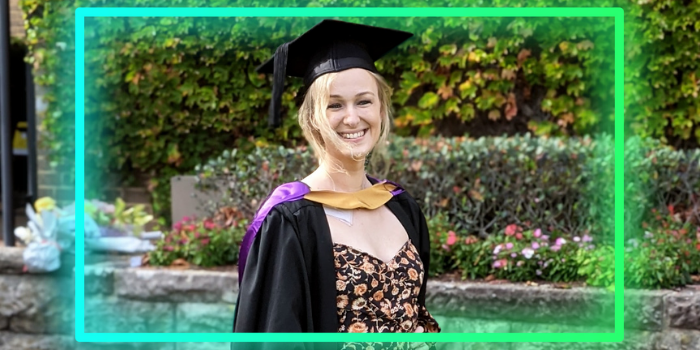 Emily Casey has always had a passion for helping people, medicine, changing the world and having a scalable impact. She is also reflective, kind and has an increasingly strong internal compass.

She dropped out of med school in 2019 when she realised the path that awaited her wasn’t something she wanted anymore.

Two years, many tacos, SheStarts and the Women Fellowship later, she has carved out a niche for herself and launched a healthtech venture. Here’s how she got there.

Part one: Straying from the path

“I always wanted to be a doctor. I wanted to help people and love problem-solving. Medicine just seemed like the logical step,” Emily tells me.

“I loved it when I first started. I was learning all these crazy things about the human body, helping people, and interacting with really, really smart people.

“But then, the further I went into the program, the more I realised you’re a little cog. You were just learning a lot of information and then regurgitating it. Yes, it had a big impact, but it was fixed to that one-on-one person experience.

“I got to this point where I wasn’t sure I wanted to invest the next 15 years of my life going down a rigid pathway that I wasn’t set on.

“I found myself quite confused, so I tried a couple of other things, like student societies, and ended up doing partnerships for med student bodies, which I completely loved.

“But I guess it just added to that confusion. I wasn’t really sure what to do next. The sunk-cost fallacy is very real and very scary. So I just stumbled my way along.

“My closest friends saw how unhappy I was.

“From the outside, I had everything. I had a good apartment and a good job, I was doing well in medicine and on track to live this perfect life that I’d thought I wanted.

“But there was doubt, deep inside, that just kept growing. I wasn’t showing up as the person I wanted to be.

“It was my mum that backed me and said ‘what’s most important is being happy and healthy and loving your life’.”

“Traveling is probably my favorite thing to do in the world. I was going to move to Spain and study abroad. But I gave it up to go to med school,” Emily says.

“Being overseas removed all those external factors and noises. It left me alone with myself to really reflect on who I was and what I wanted out of life. I met amazing people, experienced incredible culture and witnessed insane nature and food. Tacos and tequila helped too.

“As cliche as it sounds, it was a journey of self discovery.

“It was nice not to have any of those expectations, and be able to undo all the programming that it felt like I’d been given throughout my life.”

“When I was overseas, I’d started exploring pathways, and decided it’d be really cool to have a business one day. SheStarts came onto my radar, and I decided to apply,” Emily tells me.

“The only tech idea I had was something that popped into my mind when I was at Westpac. At the time, Raiz was getting quite big and a lot of new payment infrastructure had come in that made payments essentially free or close to free.

“I thought it would be cool to use the same round-up concept for social impact — either charities or impact investing.

“I put together a quick Google Doc and submitted that to SheStarts. I got through to the first round out of 800 applicants. Then the first interview. Then the second interview. And then they said: ‘Hey, you want to come to Sydney and do a pre-accelerator with 39 other companies?’

“For me, it was supposed to be a learning experience. I’d never failed at anything and had no clue what a startup was.

“It was the most amazing choice I could have made at that point.

“I learnt so much about startups. It taught me the basics of creating a business concept, validating it, and the basics of pitching. I essentially had my own early-stage startup for a while, and then used that experience to get a job as Community Manager at Stone & Chalk.”

Part four: The Women Fellowship and an alignment of stars

“COVID was a real period of reflection and growth. I figured out where I thought I wanted to go next and what I wanted to do, and realised I just didn’t have the structures in place from the community, mentor and support side,” Emily says.

“And I’d always struggled with backing myself, confidence and thinking big, so I really wanted to break that down.

“I had pretty major neck surgery at the end of last year as well. I was forced to take some time off work, which came as a circuit breaker and catalyst for creating change.

“I’d also launched What The Health, a side project curating and creating healthtech content and resources in a fun, accessible way. But I wasn’t really sure what direction I wanted to take.

“I had a couple of friends in the ecosystem who said: ‘You should do the Startmate Women Fellowship. It sounds like exactly what you need.’

“It was definitely the best thing that could’ve ever happened.

“I came into it thinking I’d explore pathways, potentially healthtech, learn a bit about VC, and honestly just find that community and network that I felt like I was lacking.

“I wasn’t really sure what direction I wanted to take, so I took a step back and explored a lot of roles through Startmate. But I continued to build What The Health. It was just a publication at the time, but sure enough, it’s sort of evolved into a community.

“Startmate definitely accelerated What The Health, because it expanded my network and got amazing people involved.

“A lot of job opportunities came through that as well. A few weeks ago, I started doing consulting for a couple of companies that came my way. Who knew community strategy was a thing!?

“It’s becoming really big in all of startupland, but healthcare and healthtech in particular.

“It just happened that all the random things I have done culminate in a really specific skill set. And it turns out, I can have a scalable impact doing the things I love.”