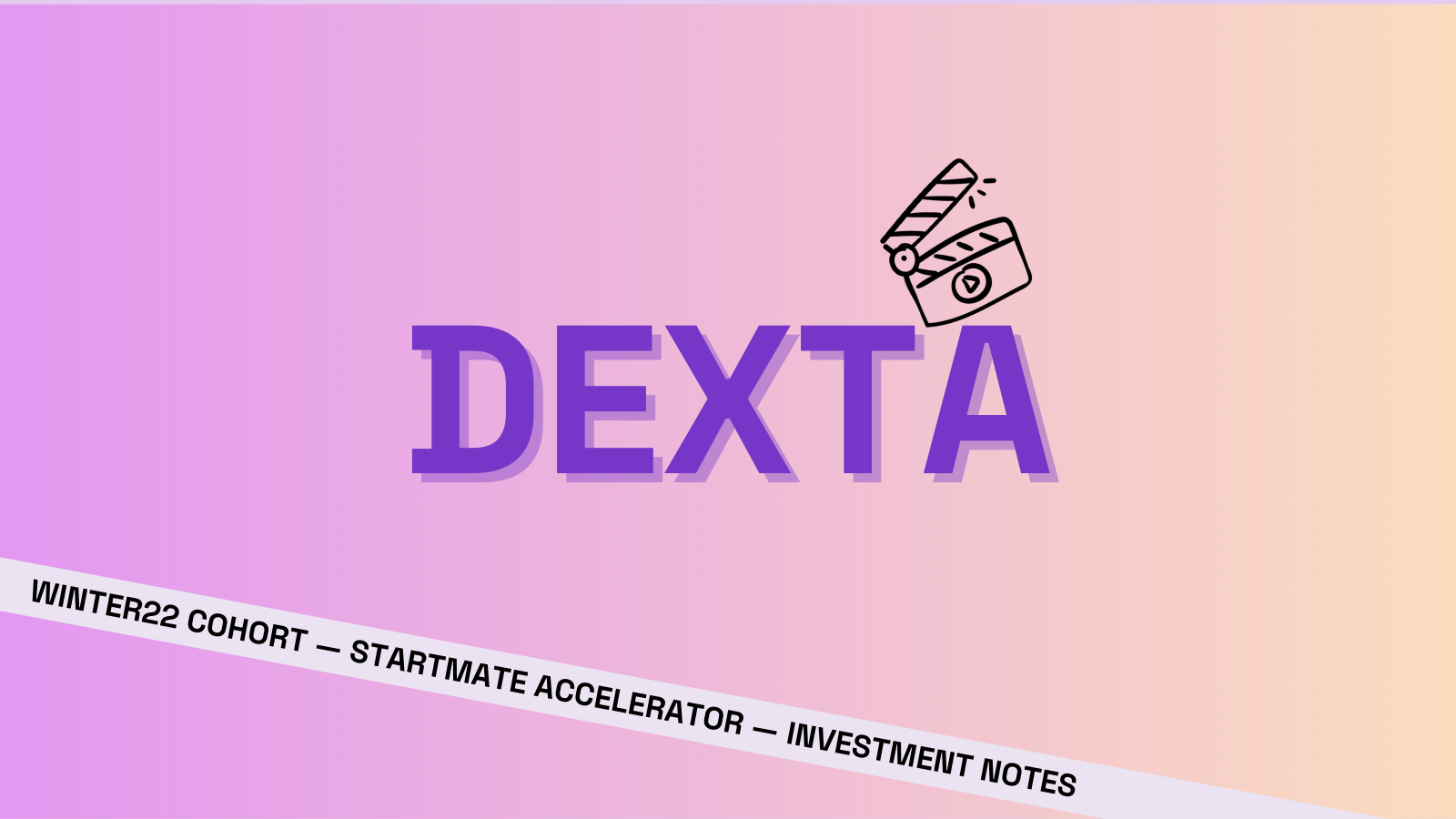 Dexta is a new way for agencies to find and book vetted production professionals.

Founded by Jack Phillips, Dexta aims to take advantage of the gig economy’s growth and reshape how businesses find creative talent, by bringing a new streamlined marketplace solution to source and book crew.

💜 What we love about the founder

Jack is a solo founder — but you wouldn’t know it. He seems heavily resourced because he consistently makes things happen. We are constantly impressed by how quickly he will go and just execute on things. He has absolutely smashed his Startmate targets. It’s a really energising quality.

He’s also very confident, which is a notable and distinguishing quality, because founders often struggle to sell the product they have built. Jack is great at sales, it’s one of his strengths.

Jack is also realistic and in it for the long haul. We know, having gone through the experience ourselves, that there’s this moment as a founder when you stop being super, super excited by your idea, and have to come to terms with the reality of building a business. This is easier said than done. But Jack’s there. He’s built several successful businesses before so he sees and understands the challenges ahead, and is ready to face them. Jack also has a clear vision of how to scale Dexta and bring it to a cash positive position.

And then there’s his experience with the pain points Dexta is solving. Jack understands what it’s like to be a productional professional, and he understands what it takes to run an agency. He’s been in this industry for a decade, working at magazines such as GQ and Monocle, on projects for Peroni, Audi and American Express, and at his own production agency Snackable.

He is passionate about the production industry. After all, he is part of this industry. He’s been in the weeds and personally spotted areas that need drastic improvement and figured out how to solve them.

At first glance, you might think Dexta is merely a marketplace that connects the content producers with the workers they need. But it’s so much more than this.

Dexta is not just a marketplace that facilitates highly transactional, one-to-one connections between businesses and individuals. Dexta enables businesses to build and book entire crews — because you need hair, makeup, lighting, a videographer, and you need all of that — and the flexibility to scale up and down depending on the size and budget of the production.

Dexta solves the production industry problem of finding, scheduling, coordinating and paying for production crew.  The magic of Dexta lies in the ability for producers to build a whole crew. This blend of connection and simplicity is a competitive advantage. Jack is building a community platform for the creative industry.

Everyone wants to produce great content. The forces are there. The expectation is there. But creative agencies don’t have the budgets they used to. They are trying to produce more and more content with less and less money.

There’s an increasing volume of work that needs to be produced at a high quality by more and more people… but there’s been no way of readily facilitating these creative projects until Dexta. The platforms and services that are available are fractured and inefficient. Now’s the time for Dexta because the scale and volume is there.

What Canva did for design, Dexta is doing for production.

Now is the time to support Dexta.

By
Matthew Tracey
Employee Share Schemes are commonplace in the startup world... but Australia's ESS approach has typically lagged on the global stage.

By
Lauren Capelin
We're proud to invest in Xylo Systems as part of our Winter22 Accelerator cohort. Here's why.

By
Rochelle Ritchie
Many of the insights shared in Ask Your Developer are relevant to a budding marketer wanting to supercharge a tech business.