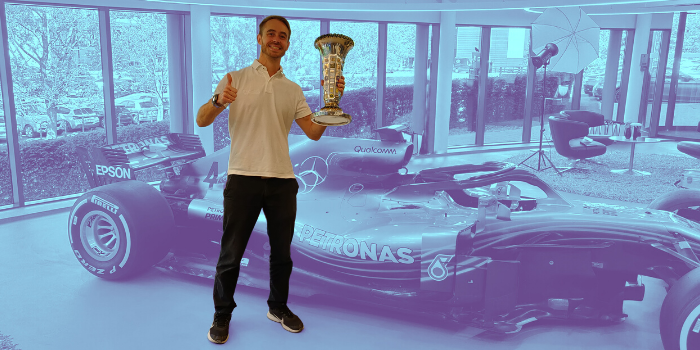 Kyle Forster is a PhD-qualified engineer specialising in aerodynamic design, a small business owner, the proud owner of an off-road race car he built from scratch... and up until a year ago, was an Aerodynamicist on Mercedes' Formula 1 team.

“Formula 1 had always been a really appealing option to me because it's the highest level of motor sport. It's something that not many people get to do, but I had the marks, and I thought the skills, to be able to get into it,” Kyle tells me.

In the tail end of his PhD, Kyle interviewed with Mercedes, who had been Formula 1 champions for three years running at the time.

“That interview went quite well,” Kyle says. “They hired me straight up. I moved to the UK and did three years at Mercedes.”

But, as it turns out, Formula 1 is a high stress environment that doesn’t let up.

“The work-life balance isn't the best in F1. It's not particularly nice to live there and it probably wasn't the healthiest environment,” Kyle admits.

“I knew I wanted to stay long enough to get proper learning and experience. But by about a year or so in, I did want to escape it.”

Here’s how he got there.

In pursuit of work-life balance

When undertaking his PhD, Kyle was part of a “strange” PhD research group that mixed race car and rocket scientists with biomedical scientists. As fate would have it, two others in the group were Vexev Founders John and Eamon.

The pair called Kyle during his second year at Mercedes and offered him a job. He tentatively accepted, with a start date of one or two years in the future.

“It was basically teed up ages before it came to fruition,” Kyle says.

When he did eventually hand in his notice and move back to Australia, he didn’t want to leave race cars behind, so he took a part-time engineering role at Vexev, leaving the rest of the week for consulting projects.

“There were a few attributes that made me go down this path,” Kyle tells me.

“That is super appealing to me because I have weird stuff going on at weird times.”

Second was the desire to work in a small team on a lot of fast moving-projects.

“I'm not one for slow-moving projects,” Kyle says.

“I didn't want to come back to Australia and work in some giant engineering firm where everything crawls at a snail's pace, you've got 40 levels of bureaucracy, and you've got to sign off with clients and all this random stuff.”

Kyle’s work at Vexev is largely mechanical engineering design, with a rapid concept generation and prototyping setup. Safe to say, it’s fast paced, with each project lasting anywhere between a few days and a few months.

“And the final thing was I wanted to work for people that would treat you a little bit better.

“Working at Vexev, they actually care about you and they want you to be happy, not just at work, but also just in life in general.

“If you work until 10pm one night, they'll tell you to come in a few hours later the next day, and no one is going to make you feel guilty for finishing at 5pm.

“Honestly, I don’t know if this is just John and Eamon, but from talking to other people, it seems to be a startup thing.”

“The startup work-life balance is just miles better,” he adds.

Do you remember what inspired you to become an engineer in the first place? Rediscover that fresh feeling through the Startmate Engineering Fellowship.

By
Izzy Bigio
Dennisson Technologies is "creating a muscle that you can wear on your body" which can move up to 900 times its weight.