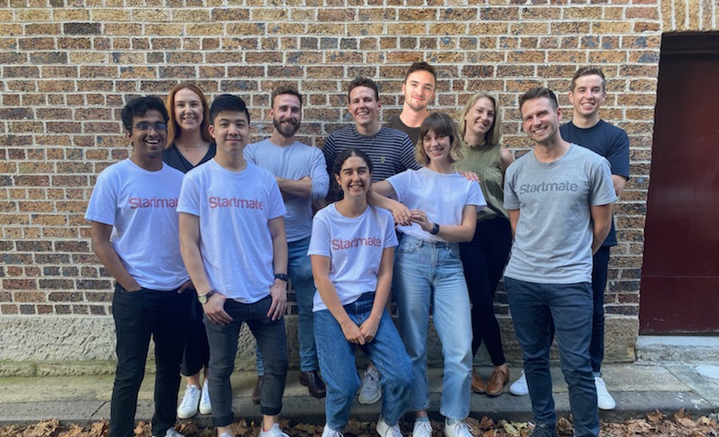 Startmate’s vision is to make Australia and New Zealand the best place in the world to build a startup, and this vision is underpinned by a flexible and flourishing approach to culture which is sculpted by every member of the Startmate team.

In this Q&A, Phoebe and I speak about intentional culture, team structure, policy, learning and development budgets and the cultural initiatives on the horizon. This is your behind the scenes peek at what it’s really like to work at Startmate.

So Phoebe, what does culture mean at Startmate?

Startmate’s philosophy is that people do their best work when they’re able to be their best selves at work. This is why we’re cultivating an environment where people are able to bring their genuine personalities to the workplace, rather than having to put a ‘work facade on’.

The outcome of this approach is we have a really interesting combination of different perspectives, conversations and working styles. Our culture is very unfiltered and genuine.

What steps have you taken to manage culture as you scale?

A big step is probably just being intentional about it. It’s very easy for culture to get away from you as you get bigger and bigger.

I think one of the best intentional things we've done is create our values and operating principles together — essentially, getting the team to workshop and refine who we are and why we do what we do. These operating principles will set the tone for how we work and how we interact with each other and the community.

By avoiding the top-down approach that most companies take when setting values, we have made the whole team the custodians of our culture. It has been and will continue to be up to the team to set the tone for what we want it to mean to work at Startmate, not just now, but for generations to come.

What are common misconceptions about your company and its culture?

I actually feel like we do a very good job of representing who we are. We're very honest, especially about our mistakes and the areas in which we’re struggling. We give people a pretty unfiltered perspective, so I genuinely don’t think there would be too many misconceptions.

How are your teams structured?

We are currently moving to a team of teams structure, that's going to enable us to collaborate better and reduce silos. In practice, this means creating groups of people with specific areas of expertise to work on specific projects.

For example, a member of the ops team, media team and programs team might come together to work on a project, with each having a different role in bringing that to life.

This is actually quite a flat structure because, within each of these project teams, there's not necessarily a manager. It's more about distributing ownership really, really clearly, so everyone knows what they're contributing and the value that they're adding to the team.

How are your weekdays and workdays structured?

Each begins with a ‘Tactical’ meeting, where the team aligns on high level strategies, and closes with ‘Waka’ on a Friday, where we reflect on learnings, progress and give out kudos. These are nice bookends, in that sense.

Zooming in, we also do a stand-up and wrap-up on Slack each day, where people share what they will be working on and what they moved the needle on, respectively.

Our weeks are also structured to accommodate for deep work where possible, and include meeting-free Wednesdays and a monthly meeting-free week.

We also wrap-up at 3pm on Fridays to give people an early start to their weekends.

And then in the context of each team member, there is a lot of flexibility. We really encourage people to work the hours that they feel comfortable working, and which fit in best with their schedule, so long as they are succeeding in their role. We’ve got parents who take chunks of time off throughout the day, we have people who prefer to start later and work later at night, and we have people who like getting up early in the morning and smashing out work and then logging off in the afternoon.

We really try to be very accommodating, within these very broad parameters, of how you work best.

How many people are in your leadership team?

We have five people in our leadership team: Batko, Lauren, Ben, Sophia and me.

Remote, but in control

How do you ensure your remote team members have a positive work experience?

I think we have an advantage in that Startmate has always been a remote-first team.

We have baked in a bunch of ‘check-in points’ throughout the day and week to ensure people feel connected. For example, daily stand-ups and wrap-ups, ‘hours of power’ where we just all jump on a Zoom and work quietly together (often with a shared playlist), and dedicated problem-solving time.

And then, as much as possible, we try to keep time in the calendar for non-work-related bonding, so weekly trivia, in person offsites, team activities.

How does the Startmate team hold themselves accountable for driving diversity?

We use Applied to shortlist candidates, which is a debiased recruitment platform that allows you to assess applicants anonymously, based solely on skills and experience.

In a meta sense, I think we also have a role to play in driving diversity in the community because our programs have such an impact on hiring in startups across the ecosystem.

A good example of this is the Women Fellowship. Some people might not know that it actually started out co-ed, but there was such a clear gender diversity issue in tech, so we shifted to being female-only, and we now have really strong goals around reducing that disparity.

Do you have any policies you would like to talk about?

Everyone has a $5,000 annual learning and development budget, in addition to their salary, which can be spent on anything you categorise as something that will benefit your learning and development. I think this is such a good way of proving Startmate cares about you being a well-rounded human being, and not just very good at your specific role. Some examples of L&D spending include book orders, courses, subscriptions, hobbies and programs.

Do you have any initiatives you'd like to talk about?

One of the disadvantages of remote workplaces is that managers don't have the oversight or visual cues they would have in an office. For example, when someone walks into the office and you can see they are tired. Because we will always be a remote-first workplace, we are really conscious of trying to keep our finger on the pulse of how the team is feeling.

With this in mind, something I think we are doing reasonably well is constantly trying to collect data. Our daily stand-ups and wrap-ups are great mini data points because they specifically include a question about energy levels. We also do a Culture Amp survey every three months, which gives us comprehensive data and insights into team wellbeing and engagement.

Our recent CultureAmp survey indicated the team’s energy levels have significantly dropped over the last few months. This is in part because people are finding it hard to take time off from work, for a host of reasons. In response, we’ve added a whole bunch of team-wide, tools-down, Kit-Kat days to the 2021 calendar, which mean a number of long weekends in November and December. They are a chance for us to give people a little injection of energy, and ensure they don’t feel guilty about taking time off while their inboxs are flooding up.

We aren’t fixing a big, systemic problem, but it’s a quick, data-driven win.

Another initiative is our $50-a-month healthy snacks budget. It’s been awesome in lockdown. As of late, I have been buying really nice Melbourne breakfast tea that I would never normally splash out on, as well as some zooper doopers. It’s called ‘healthy snacks’, but really, it’s up to you to define healthy.

What’s the policy or initiative you’re most proud of?

I’m really proud of where we’re getting to with being able to talk about wellbeing at Startmate. When I started, there was a bit of a taboo around it.

But we have a new wellbeing initiative which positions wellbeing alongside our business objectives, and our leadership team has been leading by example. People are being far more vocal about struggling to take time off work, uncovering something new with their psychologist, issues with their family or housemates or generally feeling flat.

There hasn’t been a flipped switch though. It’s been a gradual shift towards people being comfortable being open about wellbeing, and we still have a long way to go.

It's all fun and games

Tell me about the fun things you do at Startmate.

Honestly, where to begin. If we are not having fun, we are not doing it right.

This week, we had a picnic on a boat on the Yarra River. It was a chance to reflect on the year and meet some new Blackbird team members. Last week, we went on a road trip to Torquay. It rained every single day, but we worked together, played board games and cooked together.

In a couple of weeks, the whole team is going to Sydney for our quarterly offsite. We have a massive house booked 70 metres from Bondi Beach and I am organising a big Christmas celebration.

Because we are a distributed team, those points in time where we can get the team together are so valuable and important for us. We make sure to do something together at least once a quarter.

What makes your startup a great place to work?

If I had to say one thing, it would be the team's talent, ambition and drive. It’s infectious and deeply gratifying to work with a group of people who have such a strong shared belief in the impact Startmate will have in the ecosystem, as well as a shared desire to contribute to and build this.

What plans do you have for the future?

Oh, great question. One big thing on my agenda is building out our personal development capacity.

We have a responsibility to show our team members everything they could be and learn and do, instead of forcing them into a box and pretending they’ll work at Startmate forever. This is especially true in the context of all the university graduates and young people we hire.

One initiative I am looking into is getting everyone on the team a mentor from the community, who is about 10 years ahead of where they want to be.

We want to create a development framework that focuses on the reality that everyone has different objectives, aspirations for themselves. We don’t want to restrict anyone to a set path of what progression looks like, but give them the support and guidance they need to achieve their goals and vision.

By
Holly Clark
In 20 years, humanoid robot companions will be as common as the humble robot vacuum cleaner.

By
Michael Batko
Here's a breakdown of what happened in 2020 and is happening in 2021.